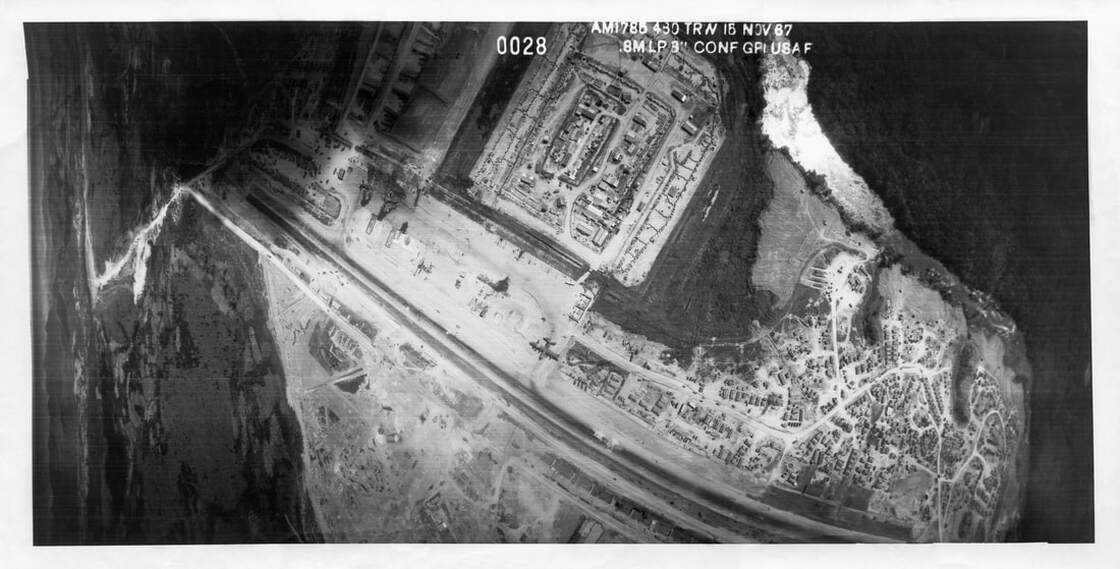 Photo taken Nov. 15, 1967, by F101 Voodoo camera plane. Special Forces A camp is at top of photo; 4th Inf. is at right. 173rd Airborne at bottom-right, out of image.
Click on the Download link to view larger, high resolution image.

Download File
This link gives you the same image, with locations noted.

We were in the middle of a very heavy resupply operation. For the last several weeks, we had been having dozens of C130s flying in supplies and flying out dead and wounded. Mortar attacks were an almost daily occurrence, but they never hit anything of importance. On this day, I had the ramp, where the planes unloaded, almost completely full of C130s, maybe 6 or so, and others in the pattern for landing. When the mortars first hit, I alerted all air traffic and the planes in the air went into holding patterns, while those on the ground took off as quickly as they could.

Unfortunately, the traffic through the apron was one way and three C130s were hit. The planes at the head of the line were able to get out onto the runway and take off. Those behind the stricken planes were able to turn around on the ramp and get out the way they'd come in.

But, the first two planes that were hit caught on fire and eventually burned. The third plane, although hit and leaking fuel, did not catch fire. Its crew was able to pull it away from the other two, turn it around, and move it as far away from them as possible on the ramp.  You can see the fuel stains on the ramp where it was turned around.

During all this, I stayed in the control tower, giving the officers in the command bunker updates on the situation as I saw it, and instructing planes still in the air that we were now closed and that they had to go back home.

Not too long after the attack, I was contacted on the radio by an Air Force reconnaissance aircraft that wanted to take some pictures of the damage. I told him to come on over, the sky was all his. When he flew over, I saw that the plane was an F101 VooDoo with a blister under the nose for the cameras. I asked the pilot if I could have a copy of the photos he was taking and he said sure. A week or two later, a photo arrived.

I've scanned that photo and posted it here for you to view. it shows pretty much the entire runway and most of the structures alongside it. If you lived here at some point, you should be able to see where you lived.

I've added a second version of the photo, this one with different locations noted.

If you can identify a tent or gun battery, I'd appreciate it if you could somehow let me know so I can add that to the photo.

​Also, there is audio that I recorded while in the tower during this attack.  Go to the Audio page to listen to it.

Photos of the attack were taken by the Air Traffic Controllers who were directly across from the ramp where the C130 aircraft were hit.  They are on a page under "125 ATC".  Here is the link to that page:  Click Here

Here is a Youtube video showing the airfield on this day, Nov. 15, 1967, and jungle activity in the following days: Click Here

In May, 2022, I found an entry on the Facebook page for "in Vietnam: Helicopter War" that was posted by James Loesch.  James posted his diary entry for that day, along with several photos that were taken by Jim Anderson.

Here is James' diary entry:
November 15, 1967 Dak To, Vietnam
335AHC Cowboys, Falcon Gunship #38365
PopGun at 7:00  (stand by location at Dak To) Slept for a while and woke to a boom.  Charles got 2 C-130s on the south ramp.  Bout 10 min's ( minutes) after, we left (the ramp is where we refueled and rearmed).  Saw the 2 planes land and park.  Art (artillery) rounds were going off all over.  Not much anyone could do.
After lunch wrote J (Judy) and went back to sleep (We napped in or under our ship).  Woke to what I thought was redleg, (our artillery) but it turned out to be another attack.  So this time we went up to look but couldn't see any thing so we came back.  Pulled inter. (25 hour aircraft inspection).
Supposed to be attacked tonight.

And here is his description of getting photos from Jim Anderson:
The amazing pictures in this post are courtesy of Jim Anderson.  We corresponded a while ago after he posted one of his pictures from this day that he witnessed from air.
He subsequently sent me all the pictures he took that day that were badly deteriorated and allowed me to restore them along with a note about himself.
My ship and I are likely in one of the pictures.  We were parked on the opposite side of the runway from the ramp and watched the whole thing.

Here are Jim Anderson's photos, in the gallery below. 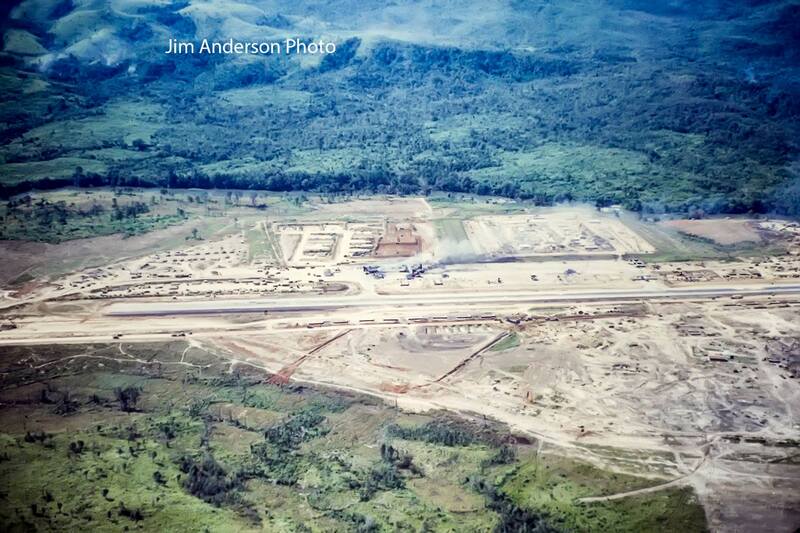 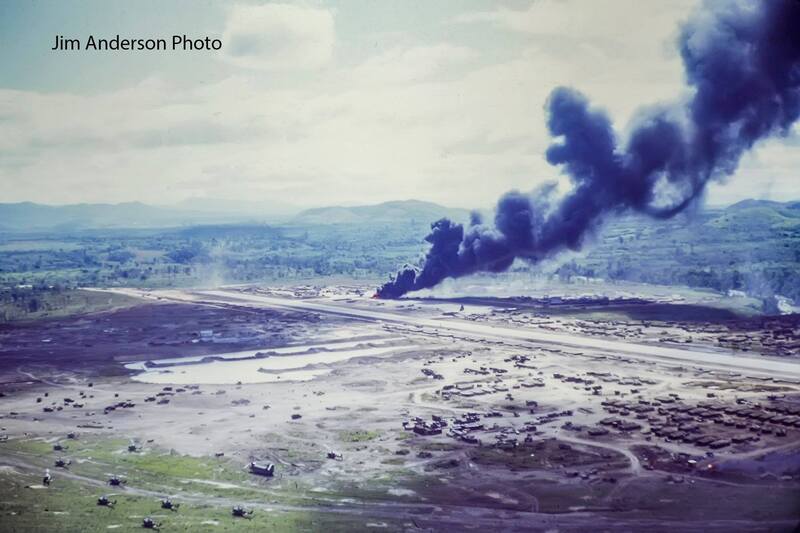 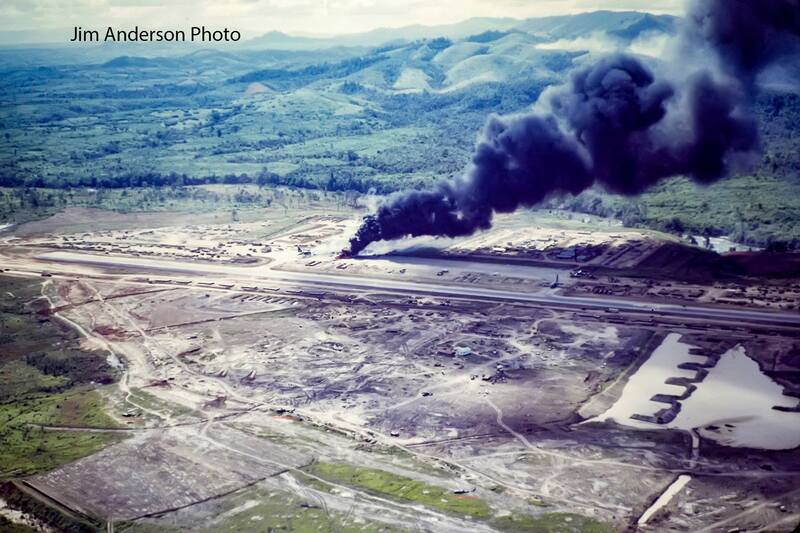 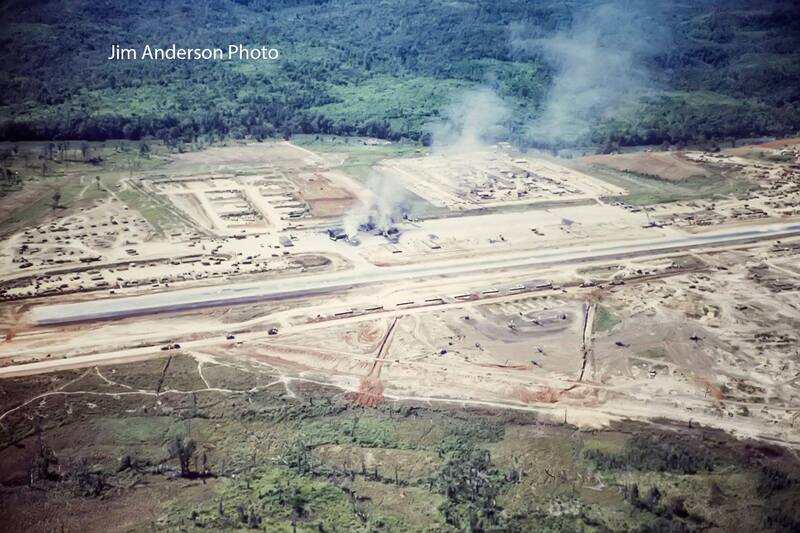 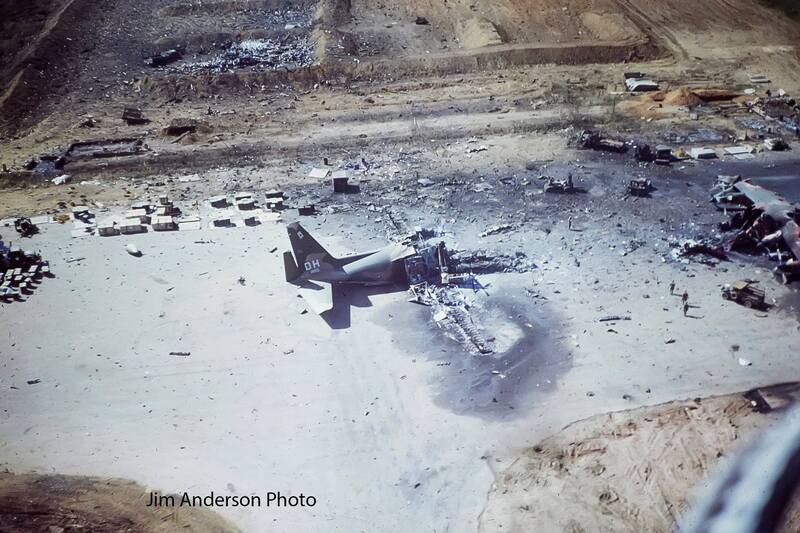 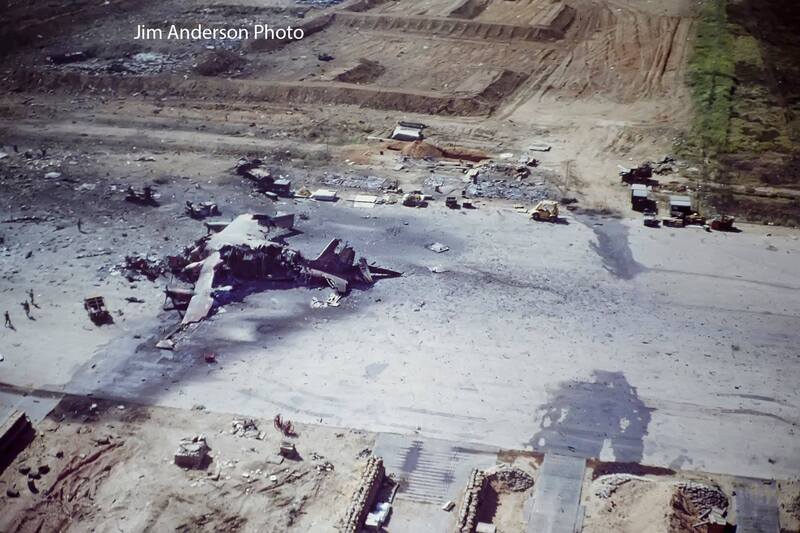 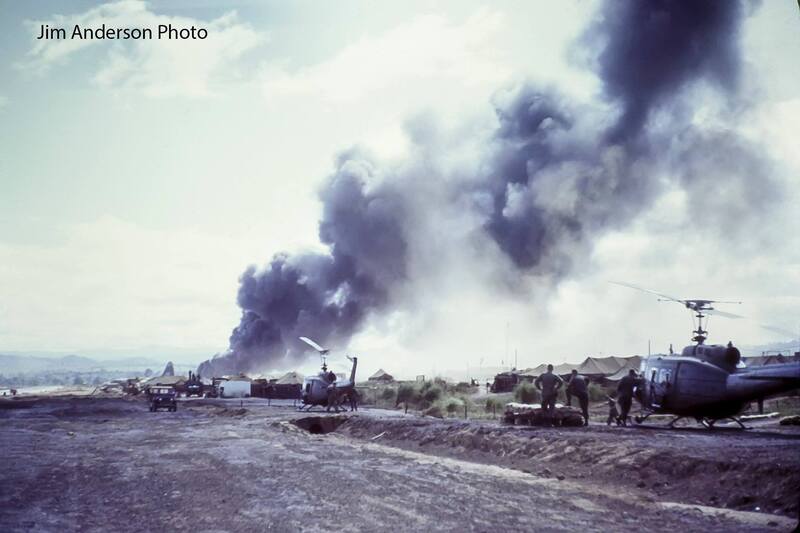 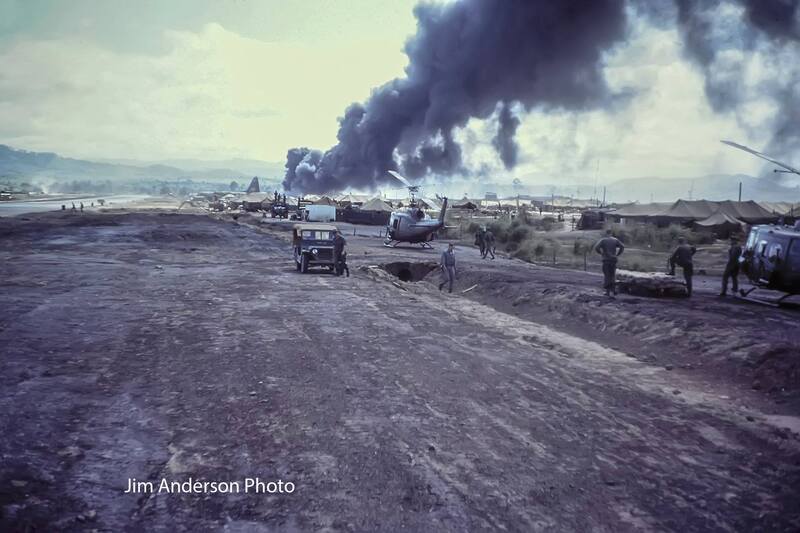 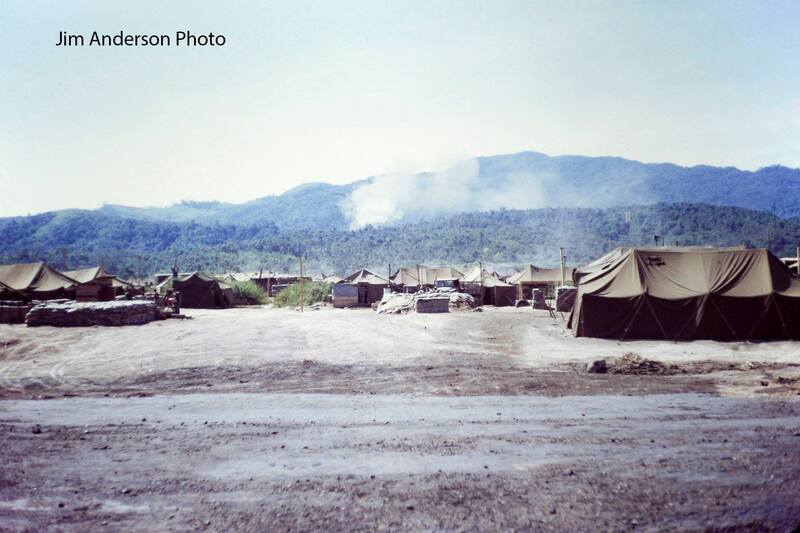