DAK TO MEMORIES
299th Engineers - Defenders of Dak To
I'm trying to get those who were involved in this engagement to contribute their stories.  To get this story started, I found an article in Vietnam Magazine that tells the overall story.  I'll put the magazine pages I've scanned into a photo gallery so you can look through them.  Hopefully you can read them this way.

Click on a cropped image in the photo gallery. That will display the full image.  Then click on the right/left of the image to go to the next image.  You can zoom in on a windows PC with the Ctrl and + keys.

If you can't read them at this resolution, you can bring up each page with the links below the photo gallery to get a much higher resolution image. 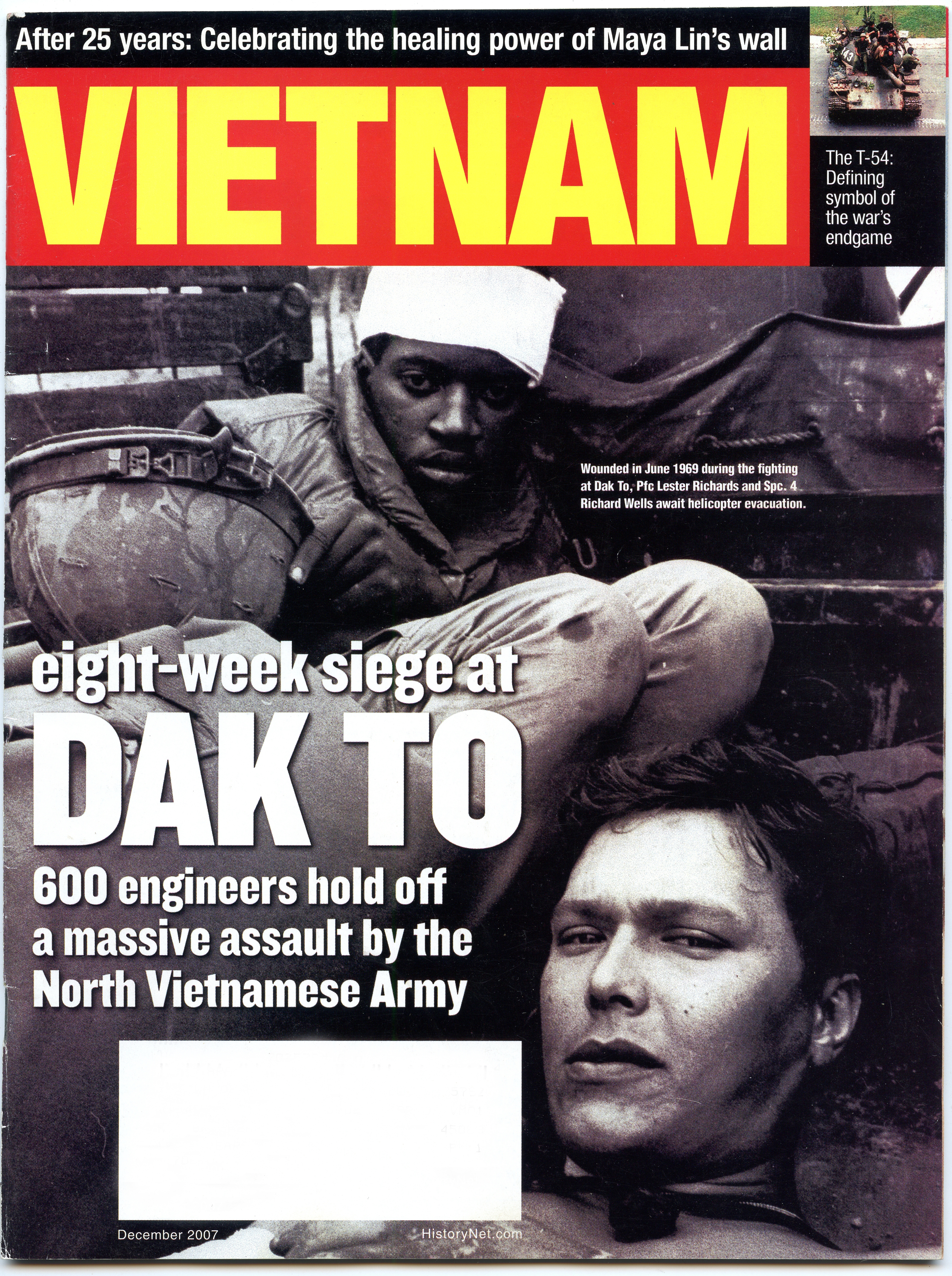 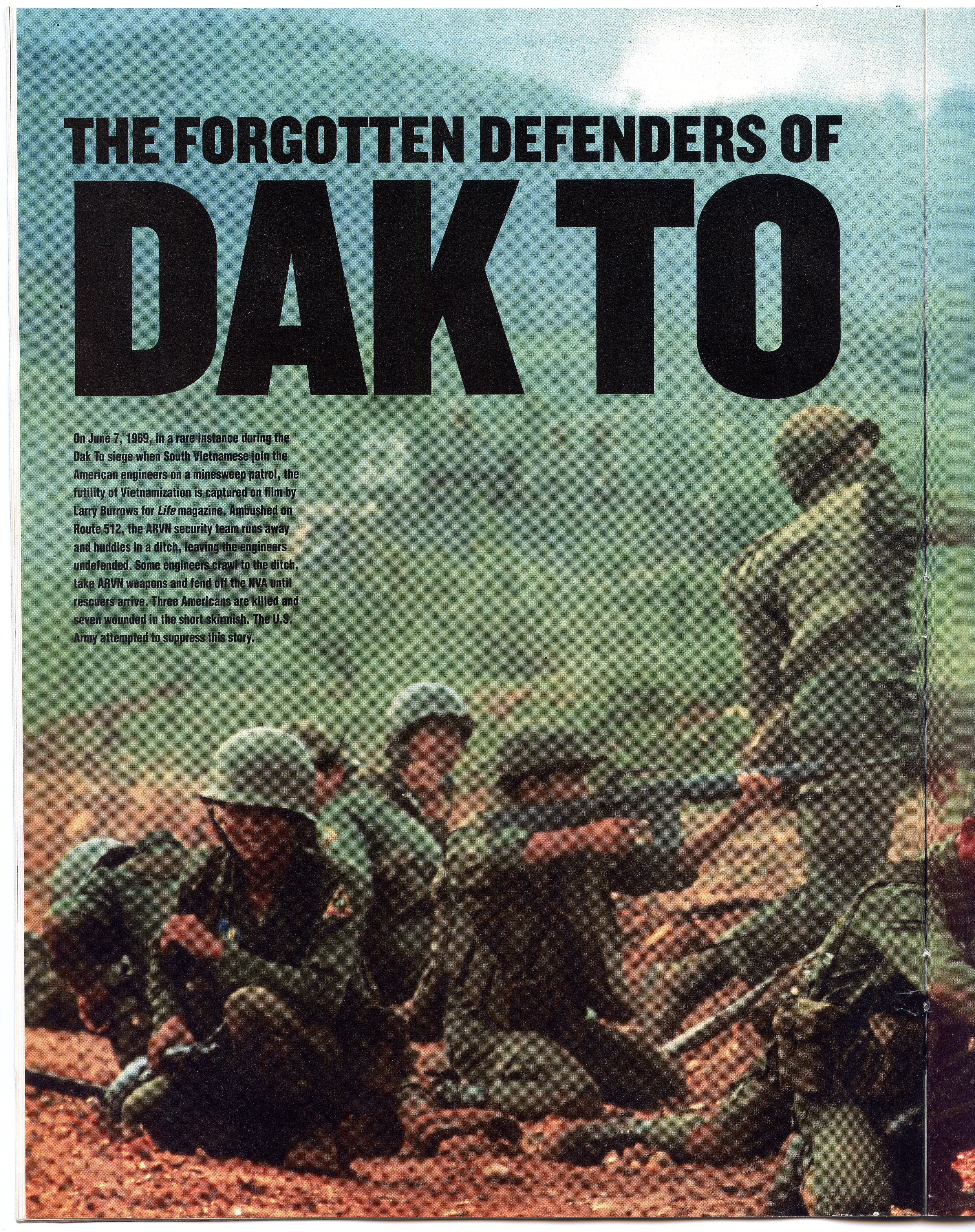 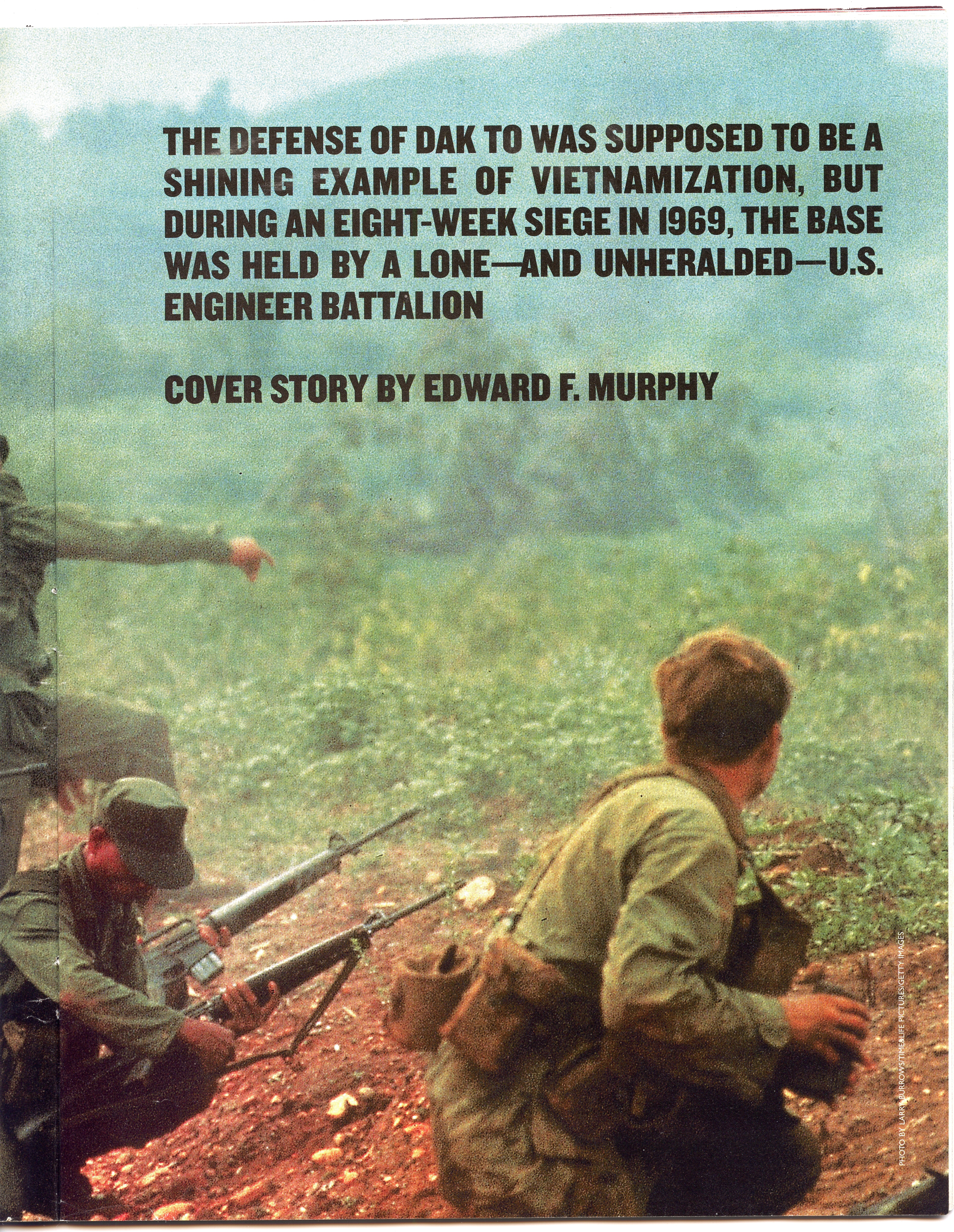 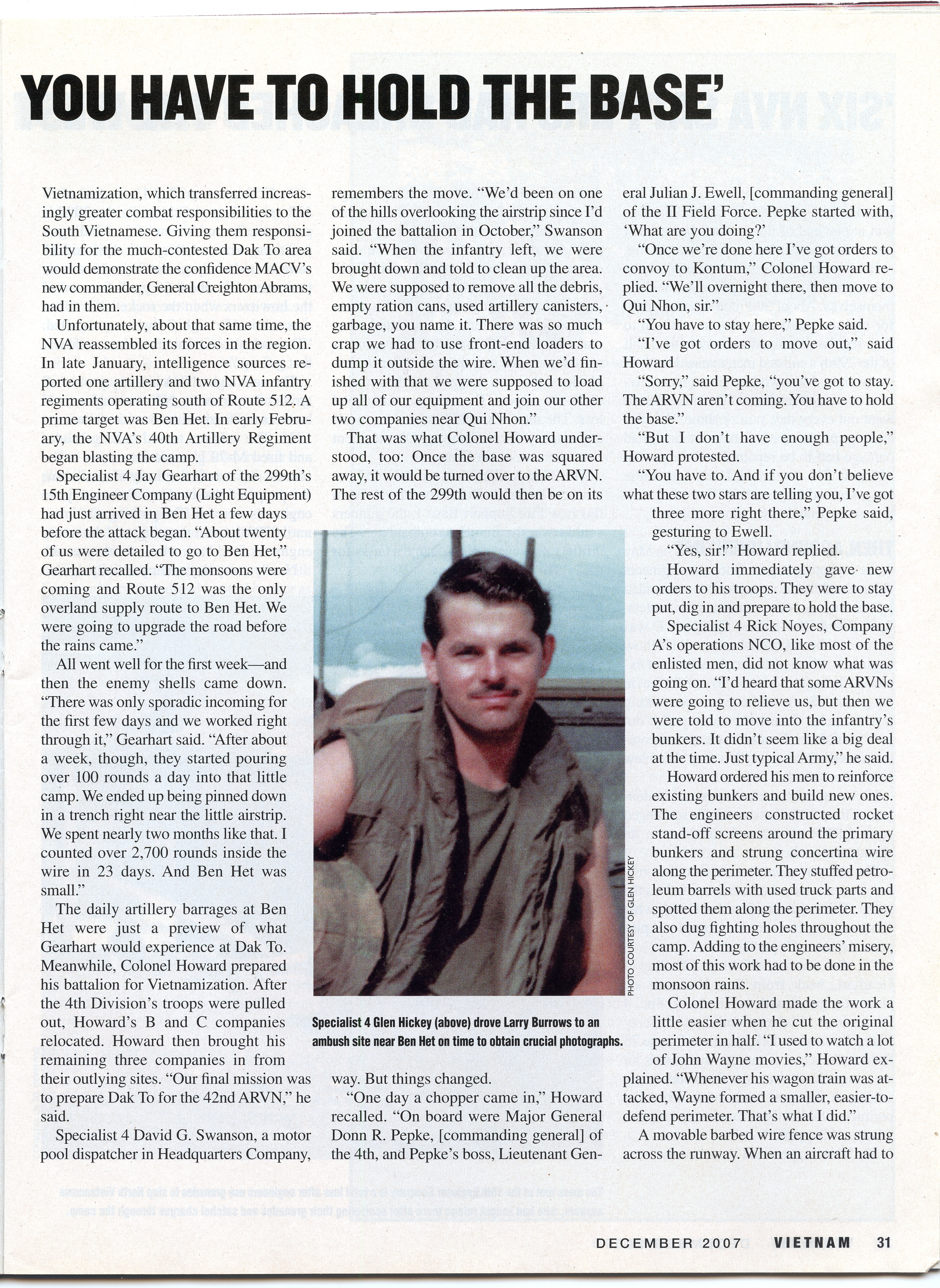 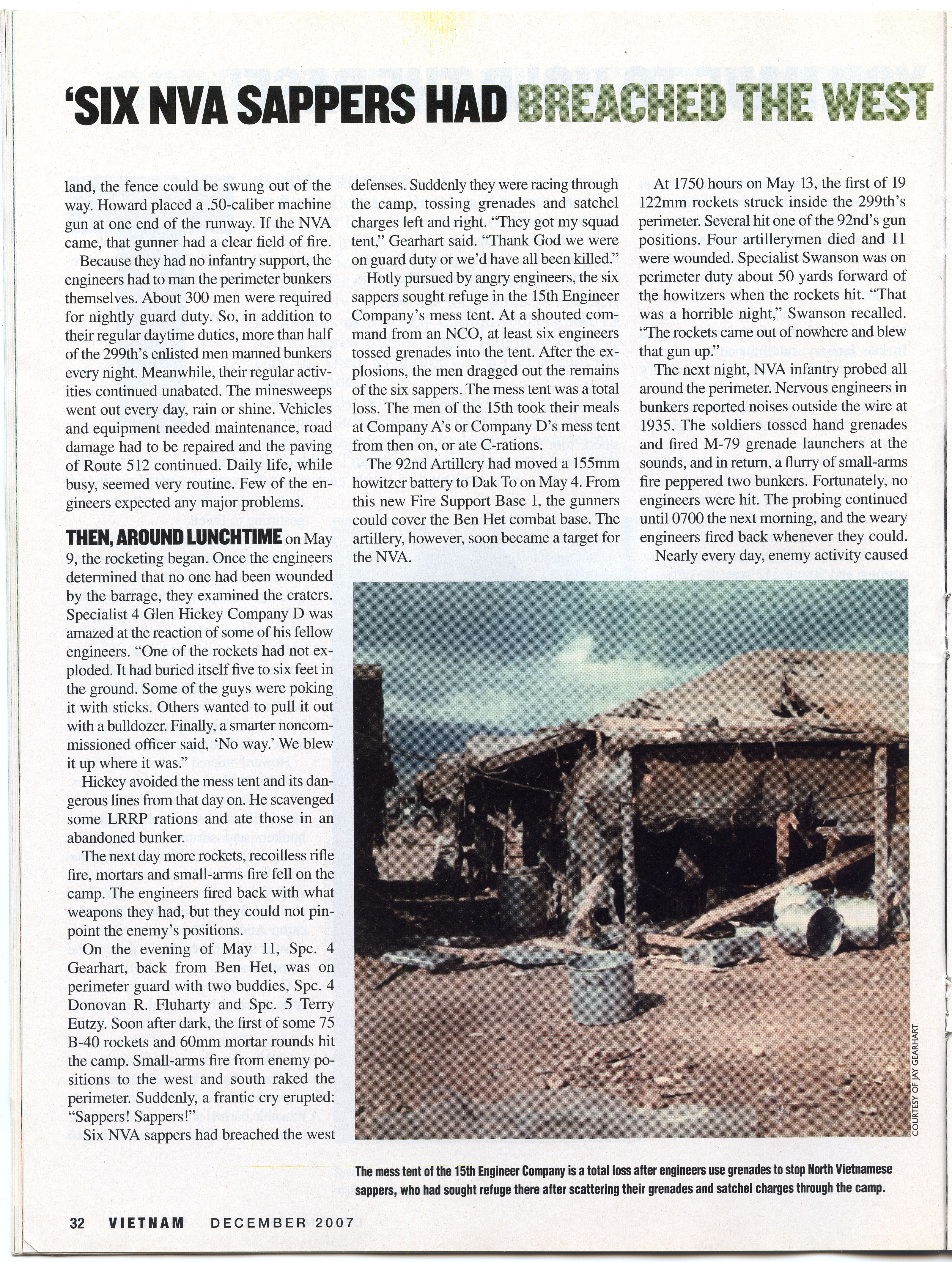 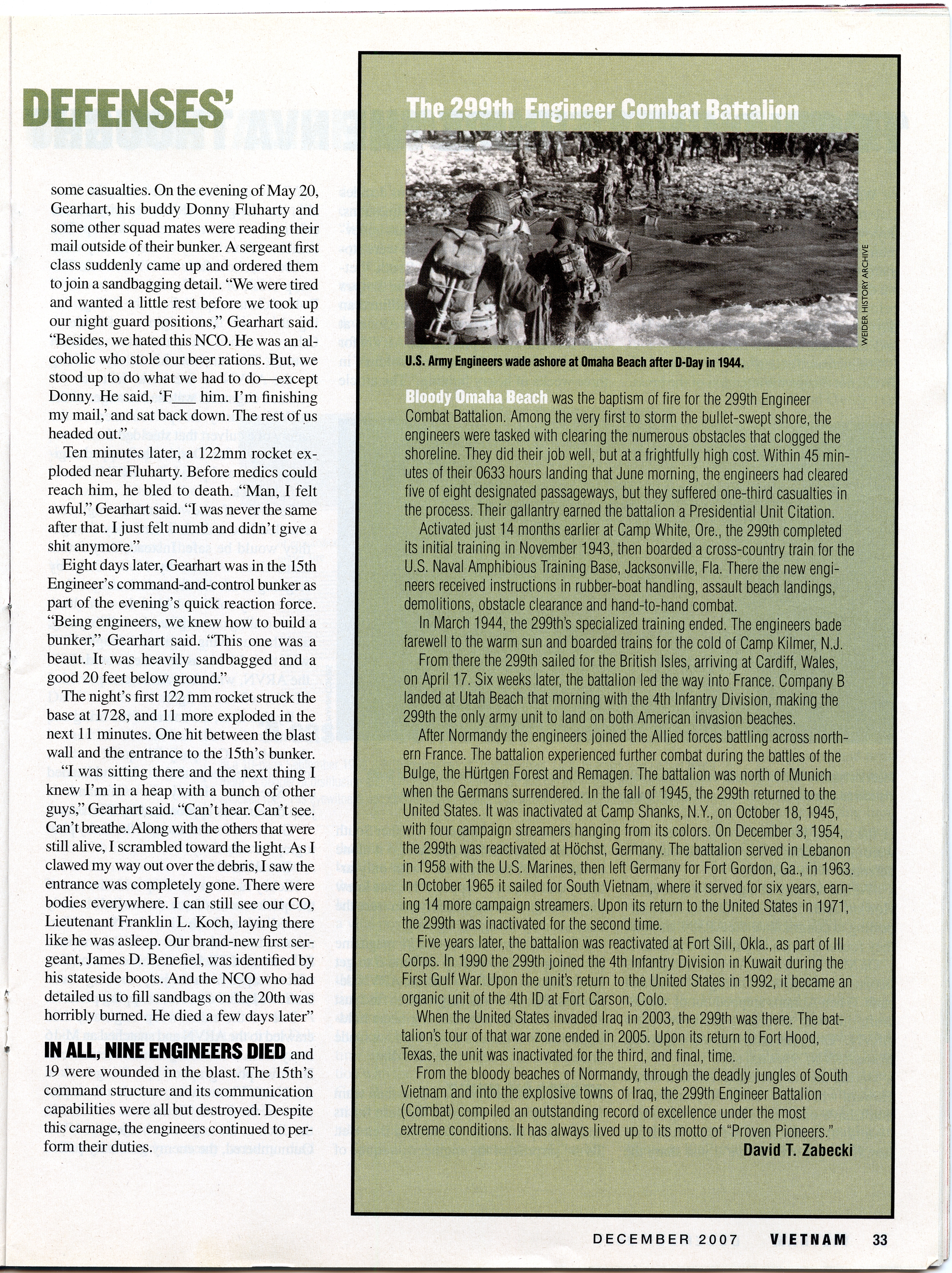 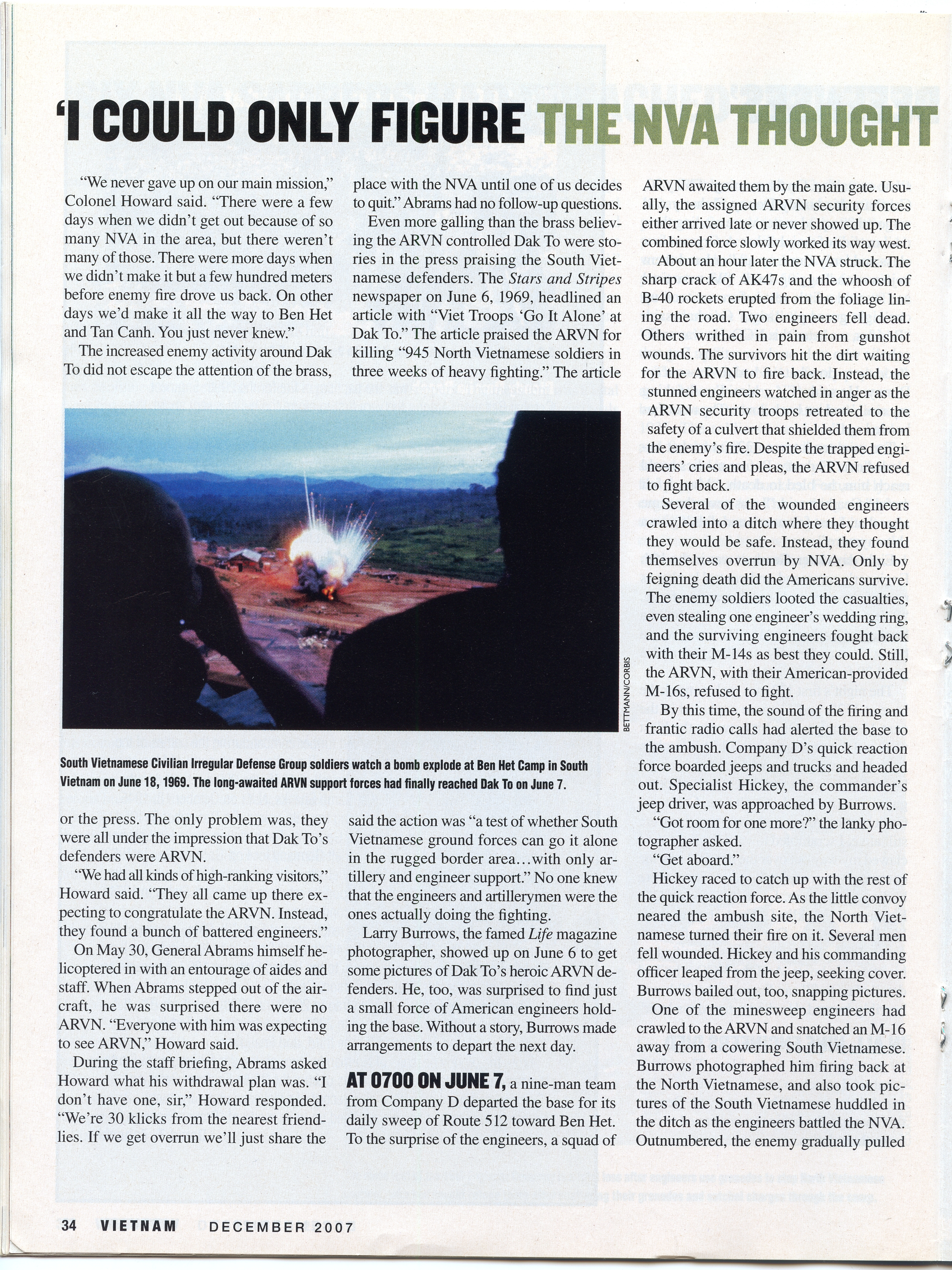 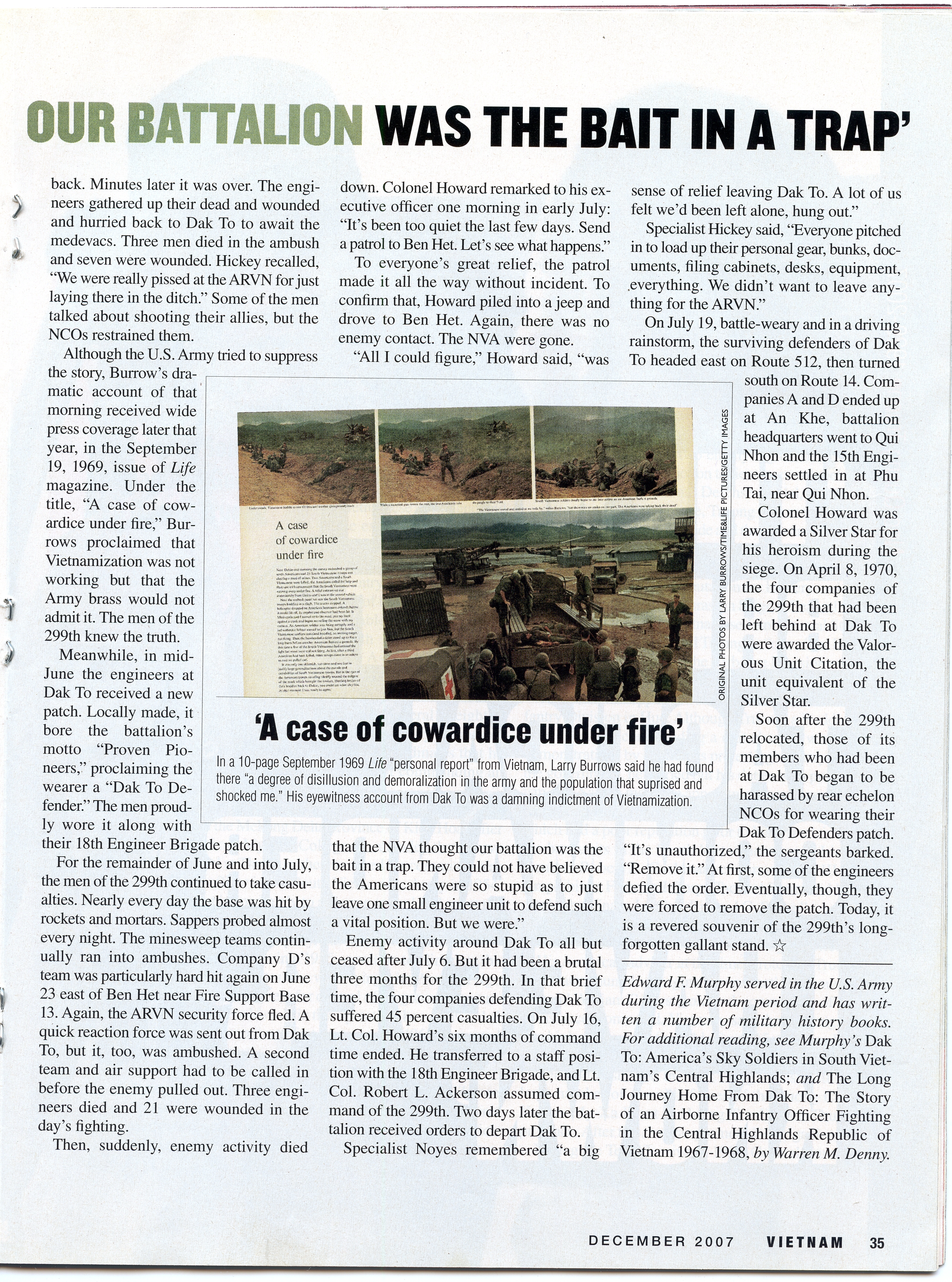 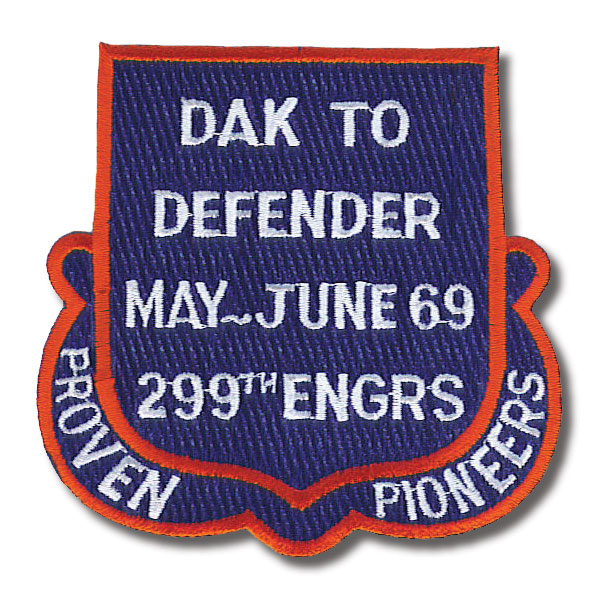 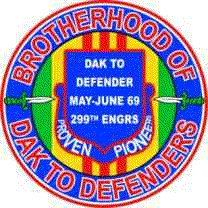 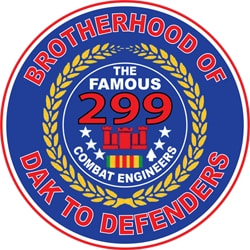 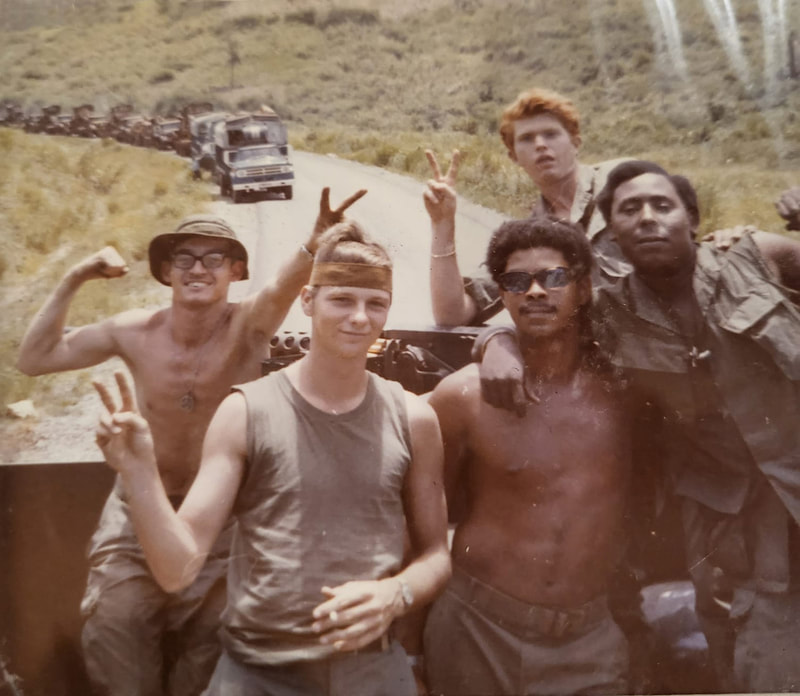 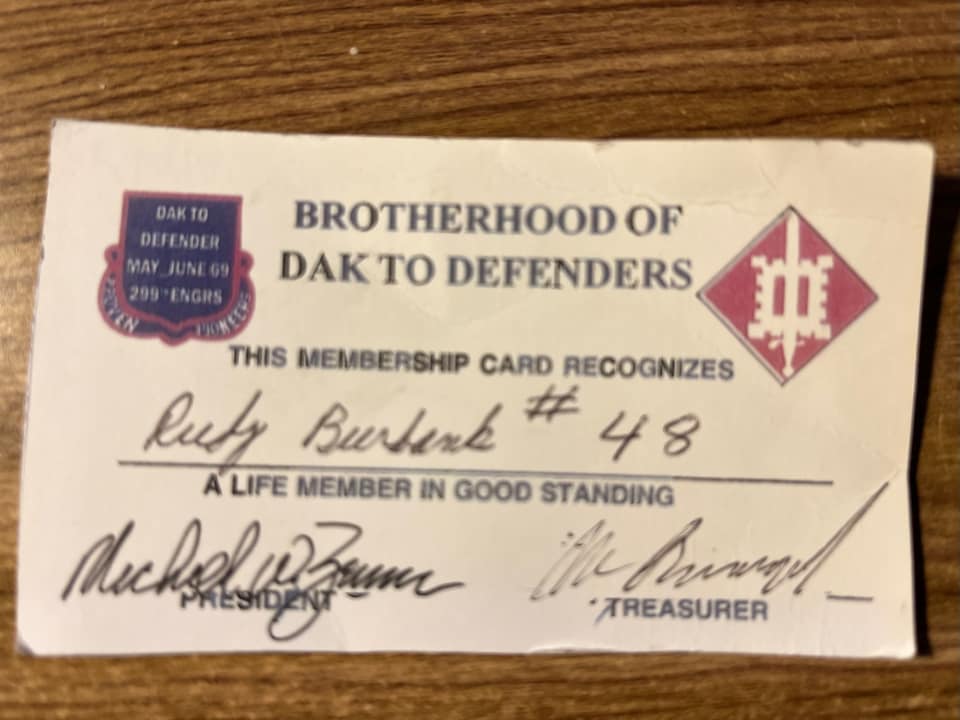 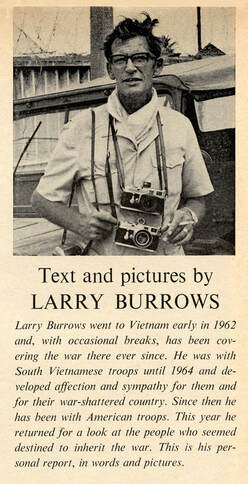 ​The Photographer whose photos are in the story from Vietnam Magazine is Larry Burrows.  Larry had a spread in Life Magazine, Sept. 19, 1966, where he talks about the ambush on the road to Ben Het, along with his photos of that action.  As above, I'll put the two pages in a photo gallery, along with some stitched-together versions of two of the photos.  There are also links to higher resolution versions of the images. 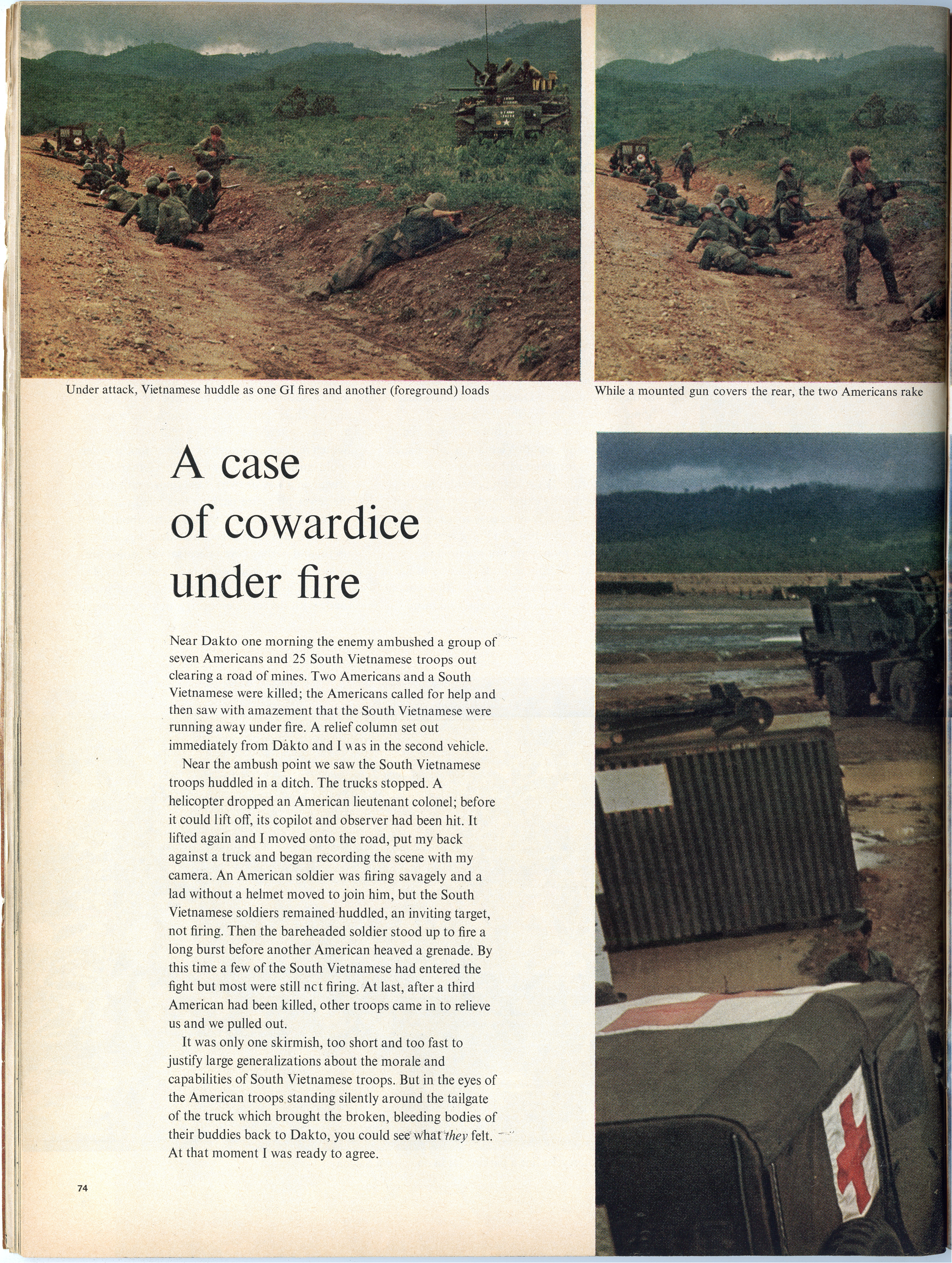 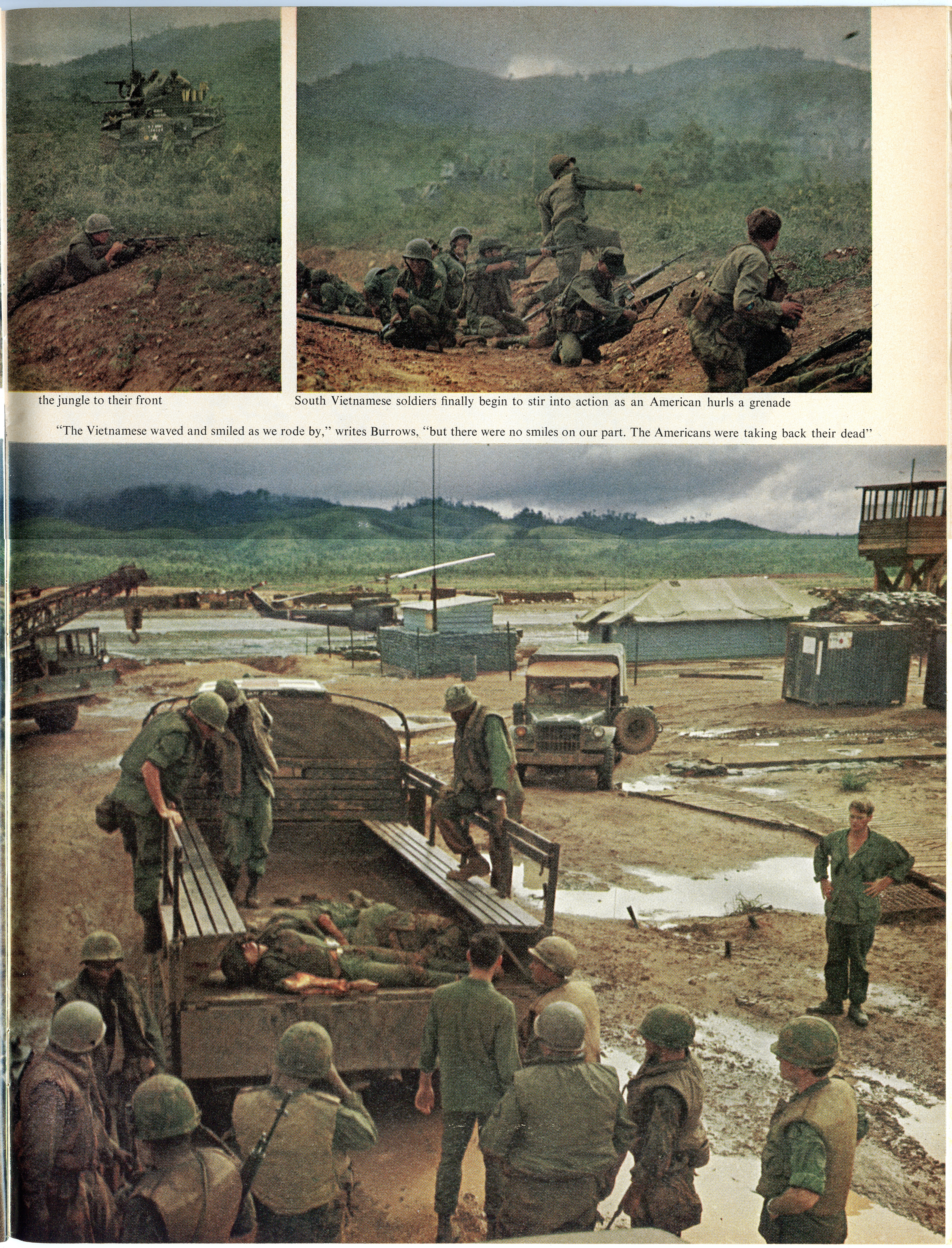 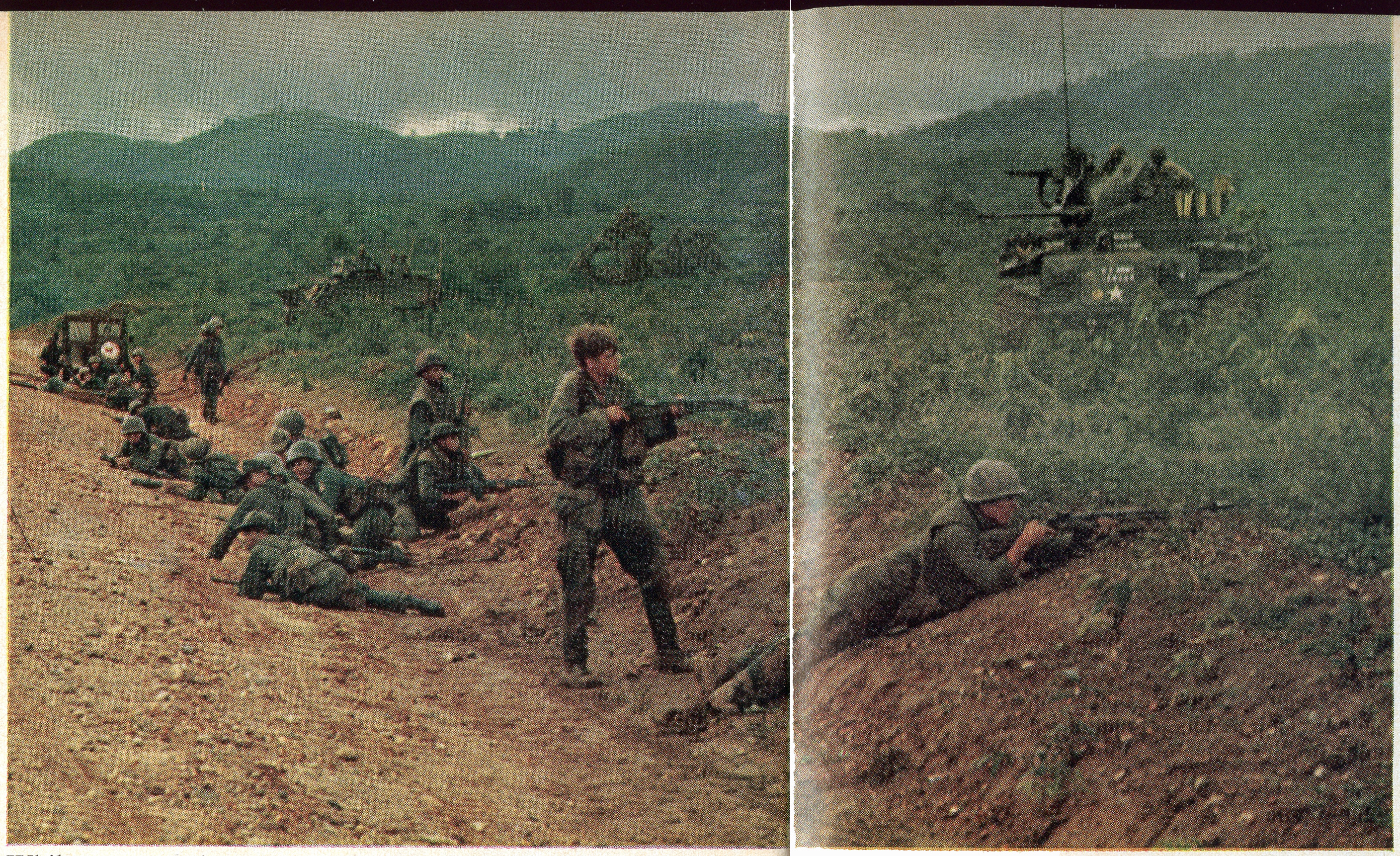 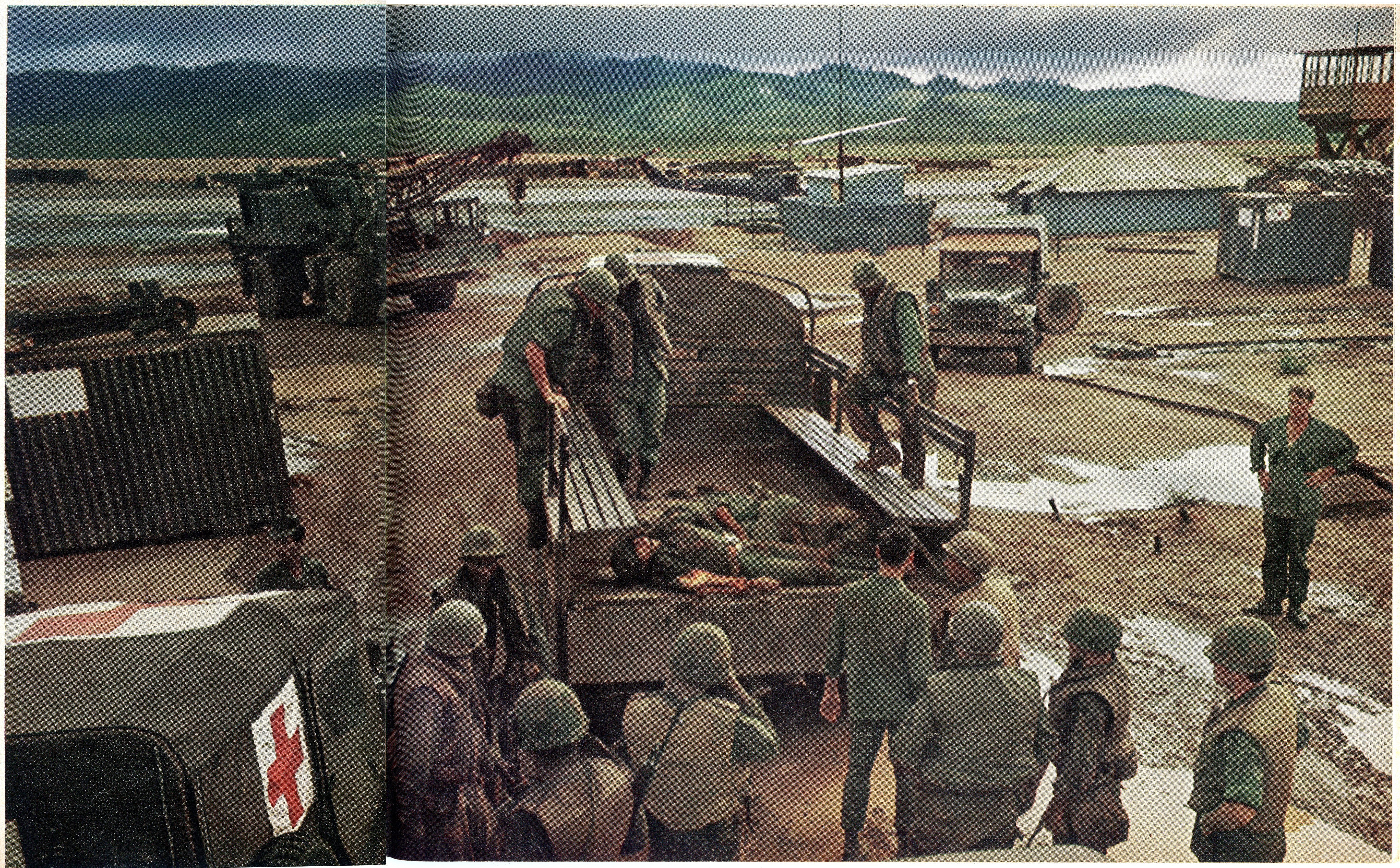 (A story about this battle that I found on Facebook)
David Lamb
Arrived in Cam Ranh Bay in March 1969. The airstrip was attacked as we were getting off the plane. What a welcome.
They shipped me off to the North Central Highlands base at Dak to. Shortly after arriving we started getting shelled.  That was the beginning of the Battle of Dak to.  Our communication bunker took a direct hit with a delayed fuse rocket.  We lost all of our Officers and NCO’s.  What a mess: new in country; under attack day and night; and no leadership.  We weren’t able to get any reinforcements or supplies.  A handful of guys   from the 299th Engineers 15th LE and a couple other companies held the base and the airstrip until help arrived.  The US ARMY awarded us with the creation of the title “Dak to Defenders” and created a patch we proudly wore the rest of our time in country.
If you know any of the Dak to Defenders, welcome them home.

During the period of time that the 299th Engineers were at Dak To, they were responsible for keeping route 512 from Dak To west to Ben Het open.

I received a letter from Ron Shaw, detailing the fact that the 299th also built up the airfield and CIDG camp at Ben Het.  I'll post his information here, along with links to the after-action reports he referenced in his letter.
Ernie,
I would like to add a post giving proof that C Company, 299th Engineers (C) built Ben Het base camp using after-action reports.
My unit isn't given proper credit. See below....

Ben Het was a significant base camp in the Vietnam war. It was used by the 173rd Airborne in the battle for hill 875 and other actions.

I was with C company in 1967 when we built the camp.  I would like for our unit to lay claim to this piece of history.  The Wikipedia page is incorrect and I'm working to get it corrected.

Here are excerpts from the after-action reports that prove we built it:

From the After-Action Report AD0390643 BATTLE FOR DAK TO HQ, 4TH INFANTRY DIVISION, 25 OCT-1 DEC 1967:
9. (C) Concept of Operation:
In the latter part of October as the indications of strong enemy interest in the DAK TO area increased, the decision was made to replace the mechanized infantry battalion which at the time had the mission of securing the DAK TO airfield, the adjacent FSA, and engineer work parties that were upgrading route 512 from TAN CANH to the proposed site of the BEN HET CIDG camp with the 3d Battalion 12th Infantry.  As enemy activity increased, the 1st Brigade, with two battalions, moved from western PLEIKU into DAK TO while the mechanized battalion and an armored cavalry squadron, because of their mobility, assumed the 1st Brigade's mission of screening the border area in western PLEIKU Province.

Ben Het base camp was built by Company C, 299th Engineer Battalion From 22 Oct 1967 to 03 Feb 1968:
From the After-Action Report AD0390643 BATTLE FOR DAK TO HQ, 4TH INFANTRY DIVISION, 25 OCT-1 DEC 1967:
Section e. Engineer Support.
(d) Company C had moved to BEN HET on 22 October (YB873257) with the mission of constructing a C-7A airfield with the provision that it could be expanded rapidly to handle C-130's.  The company was also tasked to clear the site for the proposed BEN HET CIDG camp.  The company also provided direct support to the elements of the 1st Brigade, 4th Infantry Division and to elements of the 173d Airborne Brigade located at BEN HET.

From http://www.299thcombatengineers.com/History05Bunting.htm
Company C returned from Ben Het to the Pleiku base camp on 3 Feb 1968 and undertook projects in that area.

AD0390643 after action report is available on the internet, as are the other reports. It is 30MB, too big to email.

Ron Shaw
Here are the reports that Ron used in his description, above.  Click the high-lighted text to bring up the .pdf report in a separate browser tab.