Operation HAWTHORNE begins. Its objective is to relieve a garrison of South Vietnamese Regional Forces, which has been surrounded by the North Vietnamese at a Special Forces camp near Dak To, Kontum Province.
Participants include elements of the 101st Airborne Division, two South Vietnamese battalions, and ample air support.
After the allied troops rescue the garrison, they pursue a skillful and aggressive North Vietnamese force.  The North Vietnamese 24th Regiment is eventually pushed back and pinned in its fortified base area, where it is shattered by B-52 Arc Light strikes.  Enemy forces finally withdraw, and HAWTHORNE ends on June 20.

Headquarters, I Field Force Vietnam directed the 1st Brigade, 101st Airborne Division (AM) to conduct search and destroy operation in the vicinity of DAK TO, TOU MORONG, TAN CHANH and assist in the withdrawal of the TOU MORONG Regional Force outpost.

This operation was conducted in two phases. Phase I (02 June - 06 June 1966) consisted on a three pronged converging attack by the 1-327 IN BN, the 21st ARVN Ranger battalion and the 1-42 ARVN INF REGT to relieve the besieged Regional Force outpost at TOU MORONG. Phase II (06 June - 20 June 1996) consisted of a double envelopment of the enemy located in the ridges northeast of TOU MORONG by the 1-327 IN BN and 2-502 IN BN. Subsequently, the 1-42 ARVN INF REGT, B/2-327 IN and 1-5 CAV were inserted in an attempt to encircle the enemy, then identified as the 24th NVA REGT. A massive B-52 strike was then delivered on 13 June. Following the B-52 strike, and exploitation by airmobile and ground attack was launched, and search and destroy operations were conducted through 20 June 1966.

On 07 June, the 2-502 IN BN was released from IFFORCEV reserve and immediately deployed in an airmobile assault to envelop the enemy's northern flank. From 07 - 10 June, heavy contact was made with the enemy almost continuously as the 1-327 IN BN and 2-502 IN BN sought to dislodge the NVA forces from entrenched position in the dense bamboo jungle. Between 0820H and 0847H on 13 June, the B-52 strike was launched precisely on target. Following the strike, enemy resistance crumbled and the 1-327 IN BN, 2-502 IN BN, 1-5 CAV, 1-42 ARVN INF RGT and CIDG elements immediately exploited the objective area by helicopter and overland movement. Thirty minutes following the B-52 strike, one rifle company from 2-502 IN BN had been helilifted into the B-52 target area. Large number of VC KIA's weapons and equipment were found in the area. The 2-502 IN BN located and captured 15 dazed NVA personnel. On 15 June elements of the 2-502 IN BN and 1-5 CAV engaged a company size VC force north of the B-52 strike and the enemy broke contact following tactical air strikes.

Unit(s) tasked organized or under brigade control: 2-502 IN BN

Week of June 23
On June 20, 1966, U.S. and South Vietnamese troops concluded Operation HAWTHORNE after nearly three weeks of heavy fighting.  It was an operation in Kontum Province during a year of the war in which U.S. forces broadly took the offensive against Communist troops for the first time.  The original goal of Operation HAWTHORNE was to relieve a garrison of South Vietnamese Regional Forces that had been surrounded near Đăk Tô.  But captured intelligence suggesting an imminent North Vietnamese offensive in the province led to HAWTHORNE’s expansion in order to spoil Hà Nội’s attack plan.

In late May 1966, at an outpost in northern Kon Tum Province named Tou Morong, North Vietnamese troops surrounded a group of South Vietnamese Regional Forces, cutting off their escape routes.  The defenders of Tou Morong remained pinned down by mortar and sniper fire for several days, but their position was not overrun.  This was likely because the North Vietnamese intended the attack on Tou Morong as a distraction (as captured intelligence soon indicated) for an imminent offensive by the North Vietnamese 88th and 24th Regiments, which were lurking nearby.  If the larger attack had been launched, it would have been one of the first major North Vietnamese offensive operations since the arrival of American combat troops.

If a plan for an offensive existed, however, allied forces spoiled it.  In response to the Tou Morong attack, the U.S. Army launched Operation HAWTHORNE on June 2, to relieve Tou Morong and to counter any notion Communist troops might have had of a wider attack in Kon Tum.

American commanders decided to see if they could track down the North Vietnamese before they left the region.  After a short pursuit, a series of major engagements and minor skirmishes occurred between allied troops and the North Vietnamese 24th Regiment over the following days, as U.S. and South Vietnamese forces, now joined by the 502d Infantry, pushed north and west through the jungle.  The Communist forces retreated into a prepared defensive position and readied themselves for a long fight.  But, after U.S. attacks triangulated the North Vietnamese’s precise position, American commanders requested a B-52 strike.  On June 13, an Arc Light strike force of U.S. Air Force B-52s dropped nearly 650 tons of bombs on the North Vietnamese 24th Infantry Regiment and its fortified base area.  A follow up ground attack found that the Communist forces had been devastated.

After several days of further skirmishes, Operation HAWTHORNE ended on June 20, having chased the remaining Communist soldiers into Laos and perhaps ending a North Vietnamese offensive before it began.  Later estimates indicated that the 24th Regiment had sustained a casualty rate of 60 percent, and because of this U.S. leaders judged HAWTHORNE a success, though the North Vietnamese Regiment was back to fighting strength by early 1967.  American casualties in HAWTHORNE included 48 killed, and 239 wounded.

John M. Carland, United States Army in Vietnam: Combat Operations: Stemming the Tide, May 1965 to October 1966 (Wash DC: Center of Military History, 2000), 276–88; Spencer C. Tucker, The Encyclopedia of the Vietnam War: A Political, Social, and Military History (2nd edition; Santa Barbara, CA: ABC-CLIO, 2011), 465–66.
​
​Here are some more descriptions of the Hawthorne Operation.  I've put them in their own pages.  Click on the links to view them.

After-Action report, with details and coordinates

Mike Baldinger's description of the battle 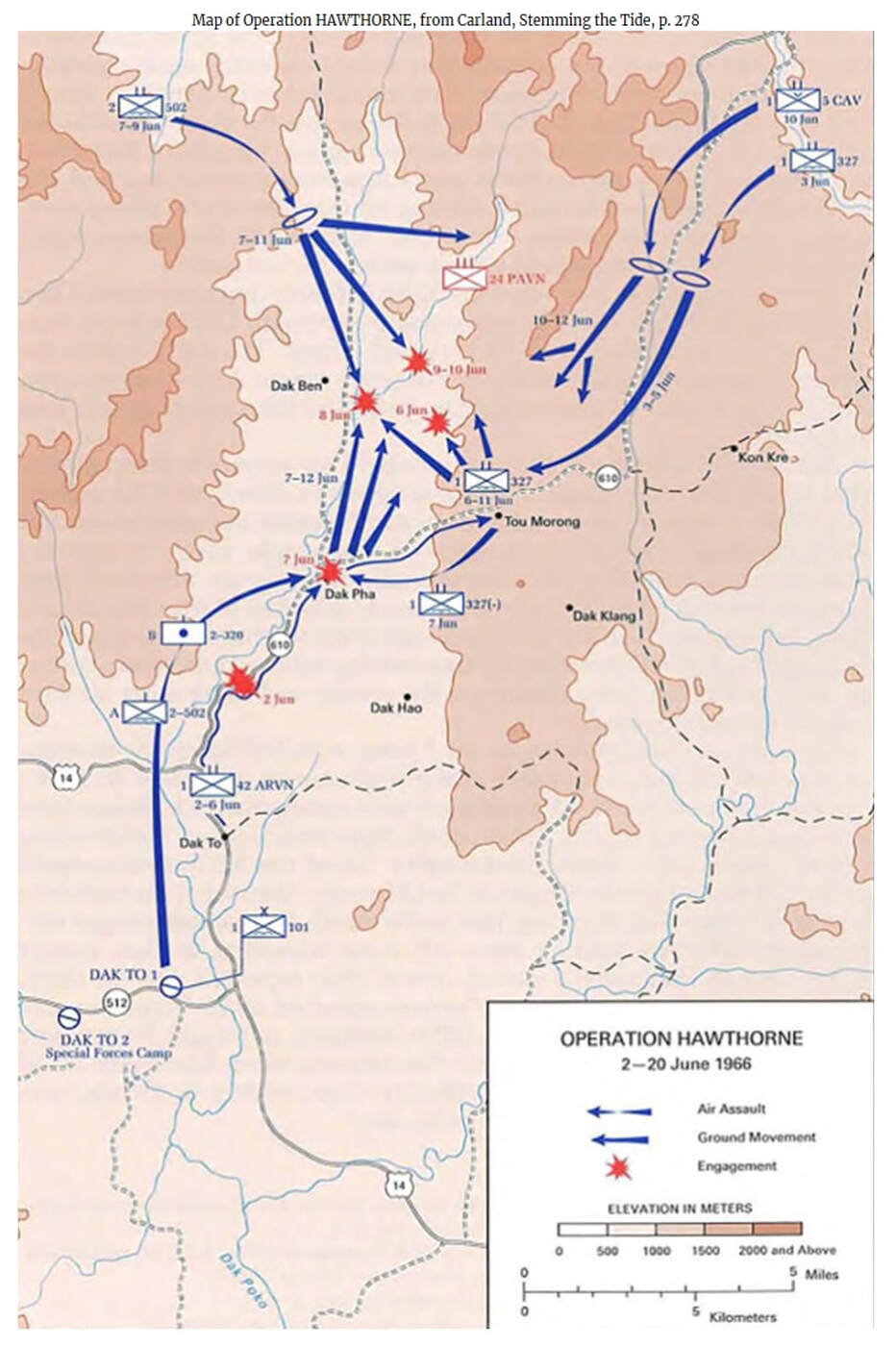 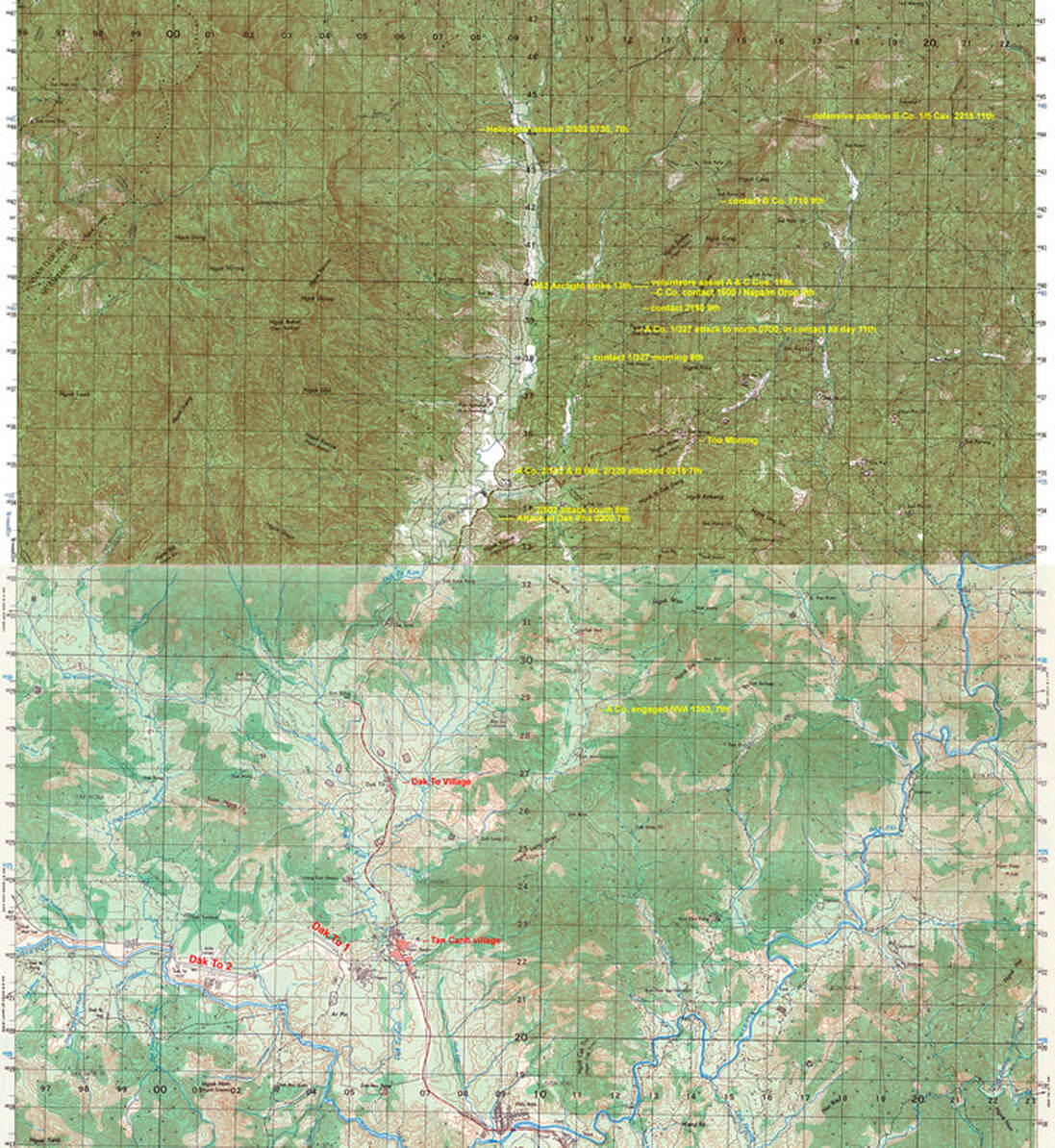 Topo map showing the area of Operation Hawthorne.  To get a higher resolution image, Click Here 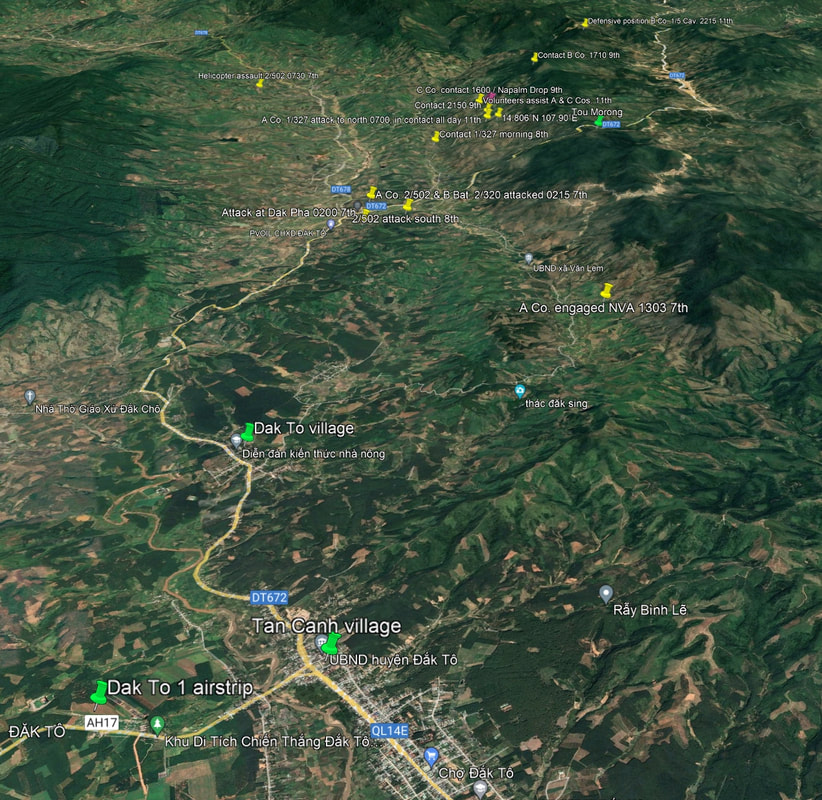 Closer view of the main battle area, as it is today in 2023

Still closer view of the main battle area, as it is today in 2023

Same view as above, but the image is from 2010 when jungle vegetation was still in place 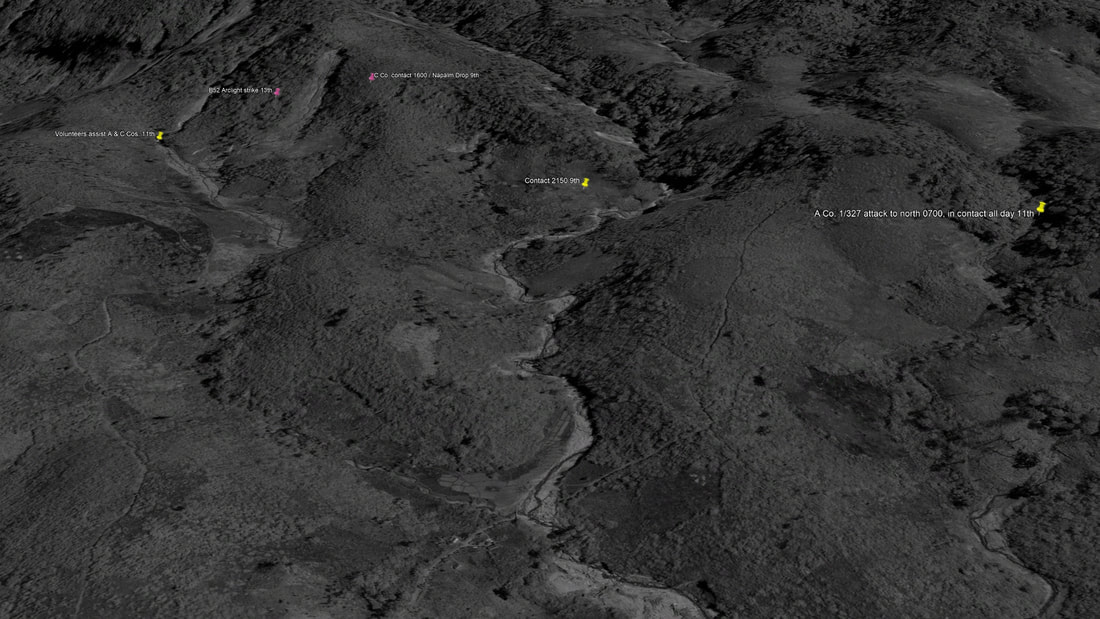 Still closer view of 2010 image.
The placemarks here were located using the topo map and coordinates from the after-action report.  I then overlaid the map on Google Earth to create the placemarks.  They should be pretty close to the accurate locations.  Please let me know if any should be moved.
Here are some photos I found on the internet.  Please let me know if these are not from Hawthorne, or if you have photos to add. 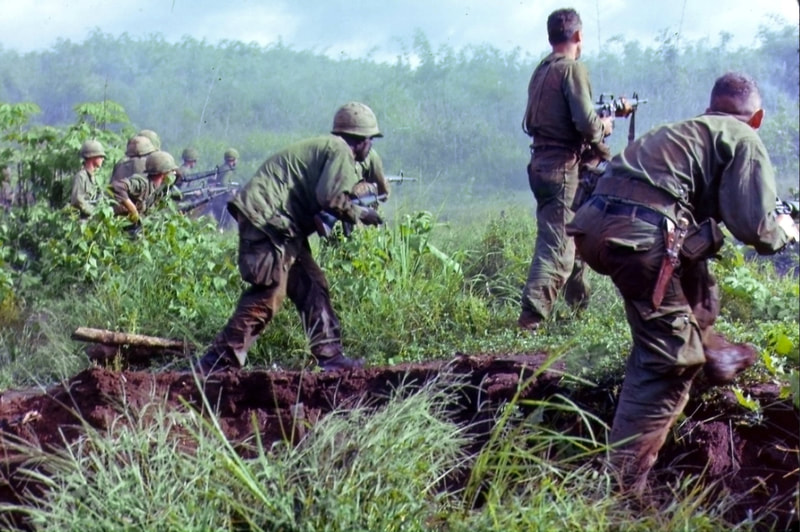 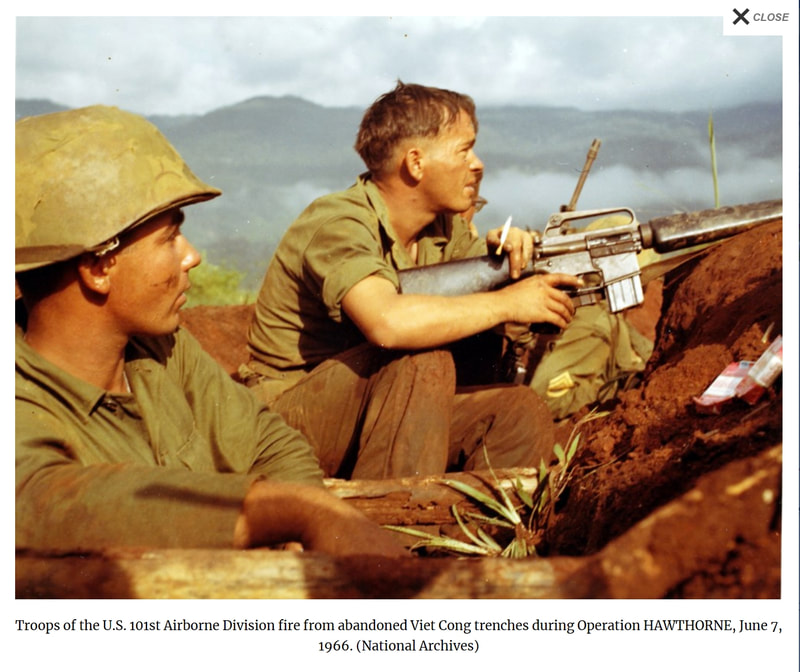 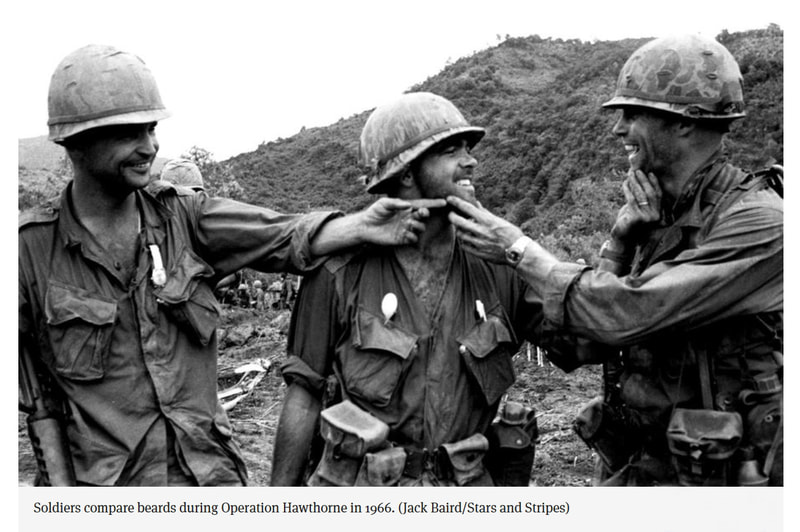 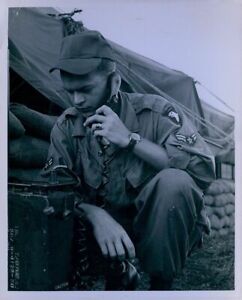 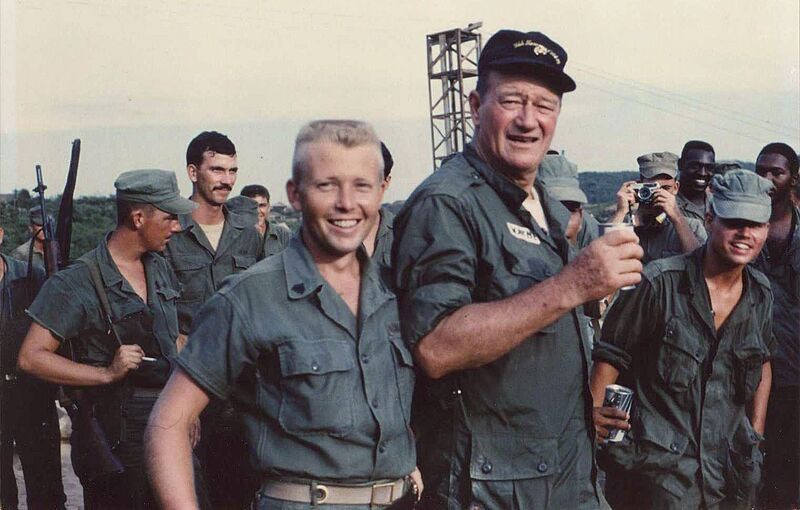 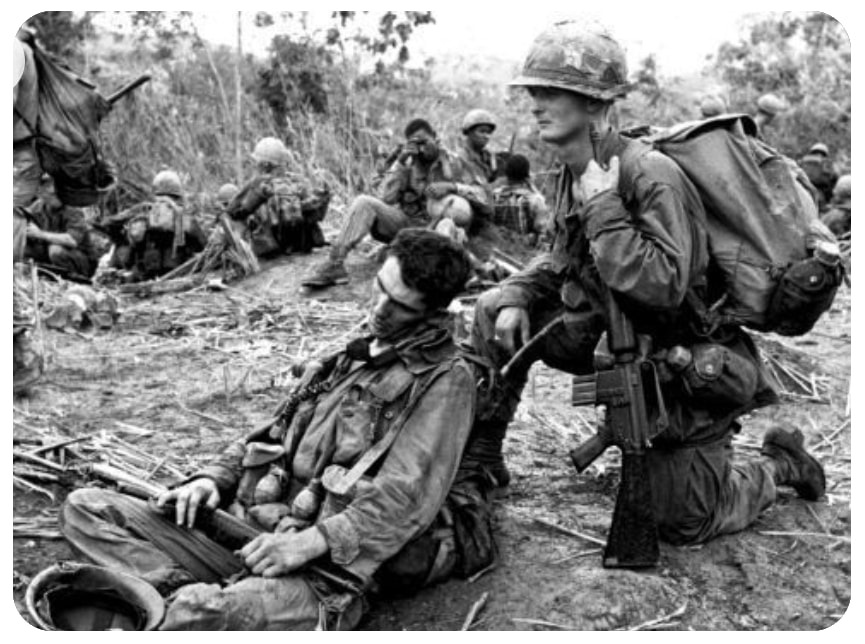 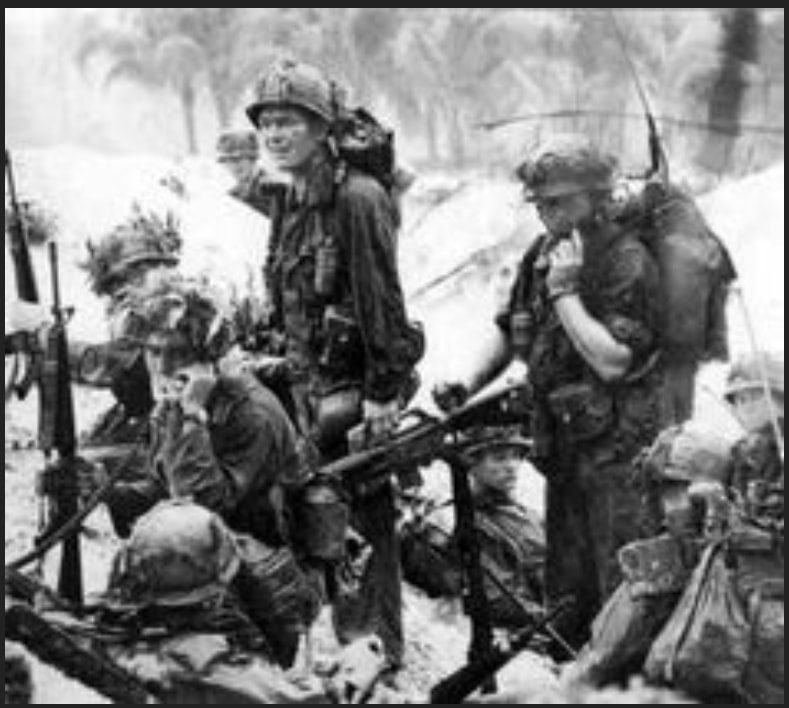 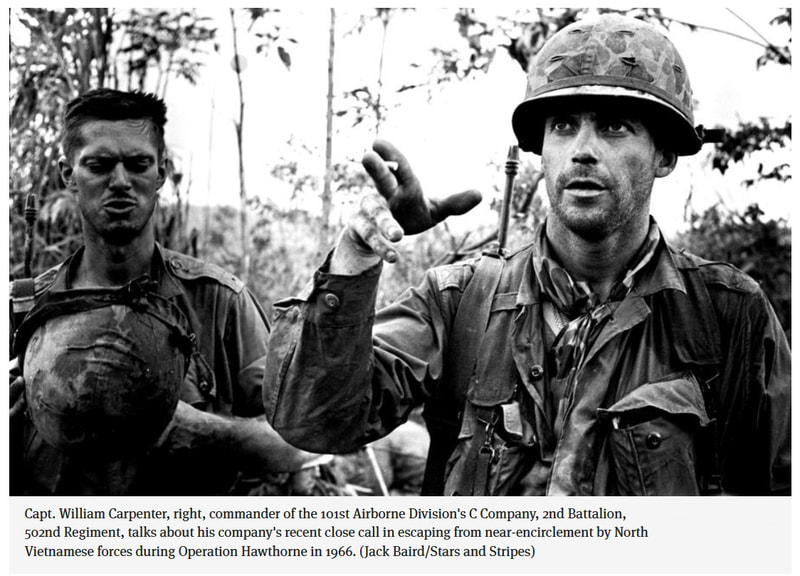 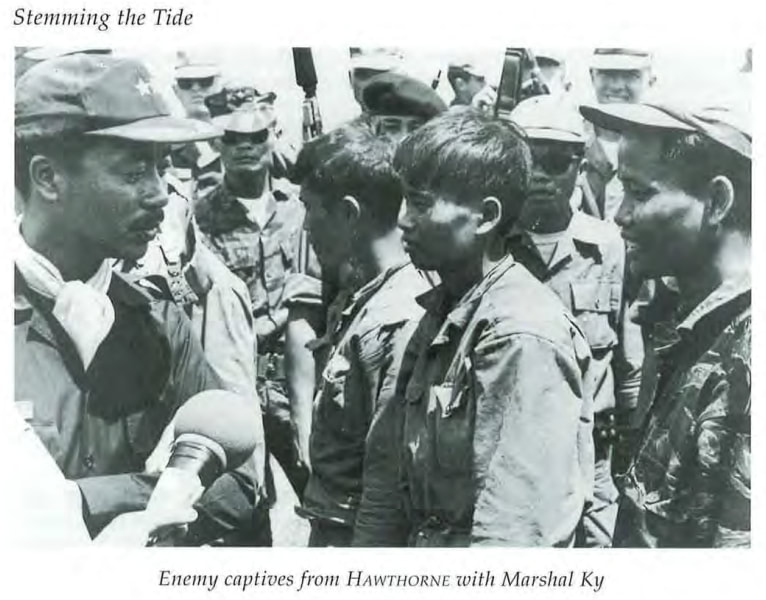 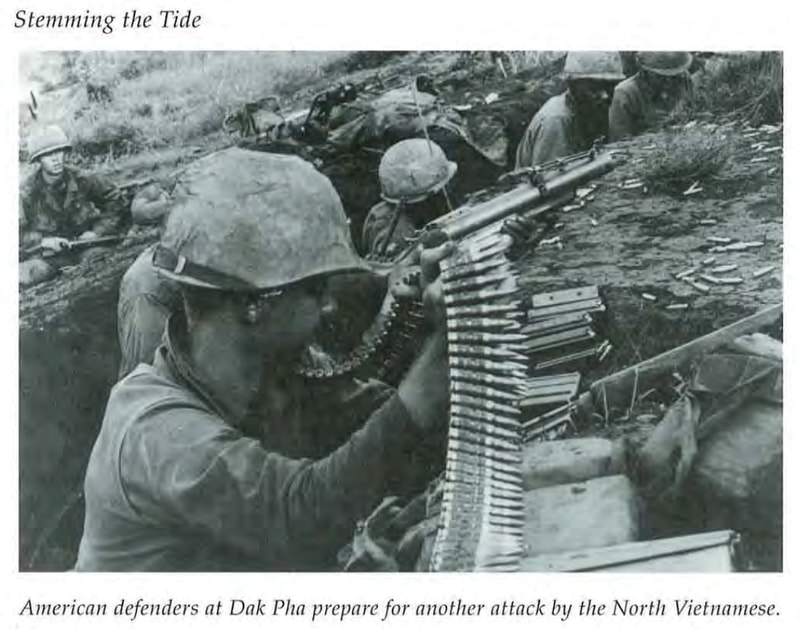 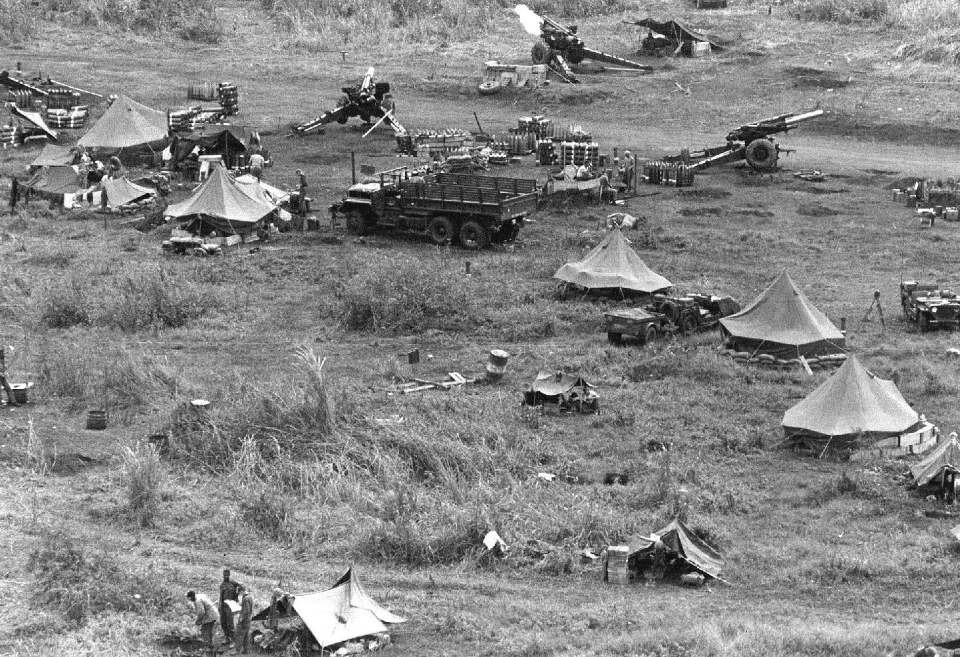