DAK TO MEMORIES
The Battle of the Slopes
There were many individual battles comprising the overall Battle of Dak To, but two engagements stand out.

The Battle for Hill 875 is perhaps the best-known engagement of operations Greeley and McArthur, on Thanksgiving 1967, but the Battle of the Slopes that took place on June 20-22, 1967, is also well known for the casualties our soldiers suffered.

I was at Dak To when this battle on the slopes of hill 1338 took place, but I was unaware of what was happening.  Only now, some 50 years later, am I learning the full extent of what occurred there.  I want to present as full a description of this battle as I can.  Luckily, the unit involved, the 2nd Battalion of the 173d Airborne Brigade, published a special edition of their newsletter on the battle's anniversary in 2011 to commemorate the battle.

This special edition of the 2/503d newsletter contains not only the after-action report, but other descriptions of the engagement by several of those who fought in it.

I have copied the newsletter from their website to be sure there is a copy here.  I also have links to the Wikipedia entry for this battle, and audio of the battle that I found on Youtube.

I'm also adding a Google Earth image of the battle area.  The Google Earth imagery is from now, 2022, and it shows the entire area no longer in triple-canopy jungle but logged and cleared for agriculture, with a road on the spine of the ridge.  The exact location of the engagement is not well documented.  I have found specific locations for:
- the top of Hill 1338
- the last reported location of the Company A perimeter
- one enemy location reported on the audio of the battle

The reported extent of the action was from the top of Hill 1338 to that last Co. A perimeter.
​
Reports also state that the action took place about 2000 meters from Dak To.  That 2000 meters is about half-way to the section of ridge where the last perimeter was.  Hopefully, those who know will read this and be able to add more detail.

2nd Battalion, 173d Airborne Brigade, Newsletter for June 22, 2011
Special Edition commemorating the Battle of the Slopes
Click Here
If you are having trouble displaying this .pdf file, here is the link to the website hosting this Newsletter:   Click Here

​A note about this newsletter:  It appears that the authors wanted to use photos of the Dak To area but some of the photos are not from the time of the battle.  For example, one photo shows aircraft burning at Dak To.  That happened in November.  Another photo shows helicopters parked in revetments with protective walls.  Those walls were not added until later in the summer.  This is just a minor historical discrepancy.
Here is the Wikipedia page for the Battle of the Slopes.   Click Here
And here is Audio of the battle, found on Youtube:   Part1    Part2    Part3   Part4 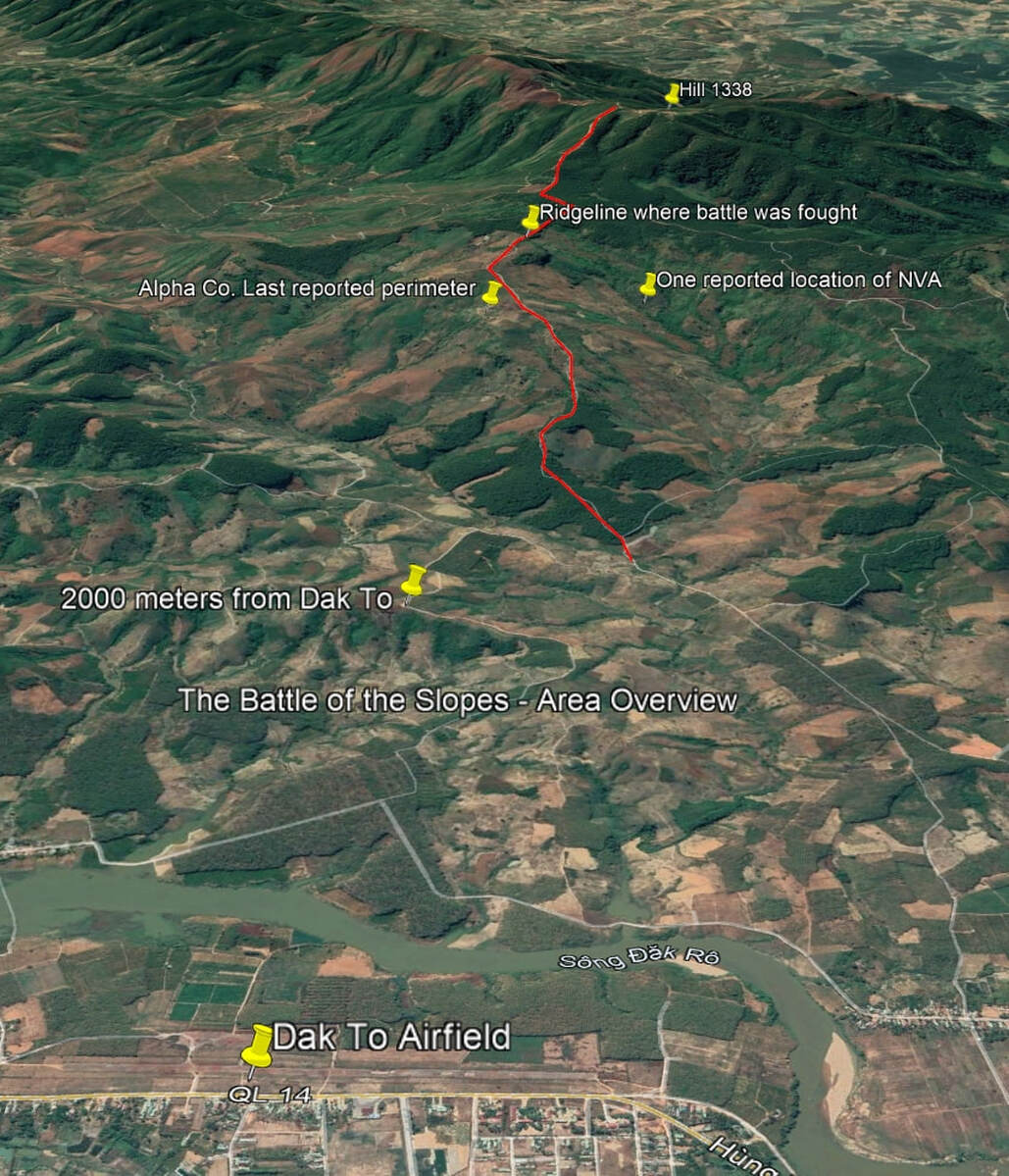 Here are After Action reports and Lessons Learned reports that I found on the internet: