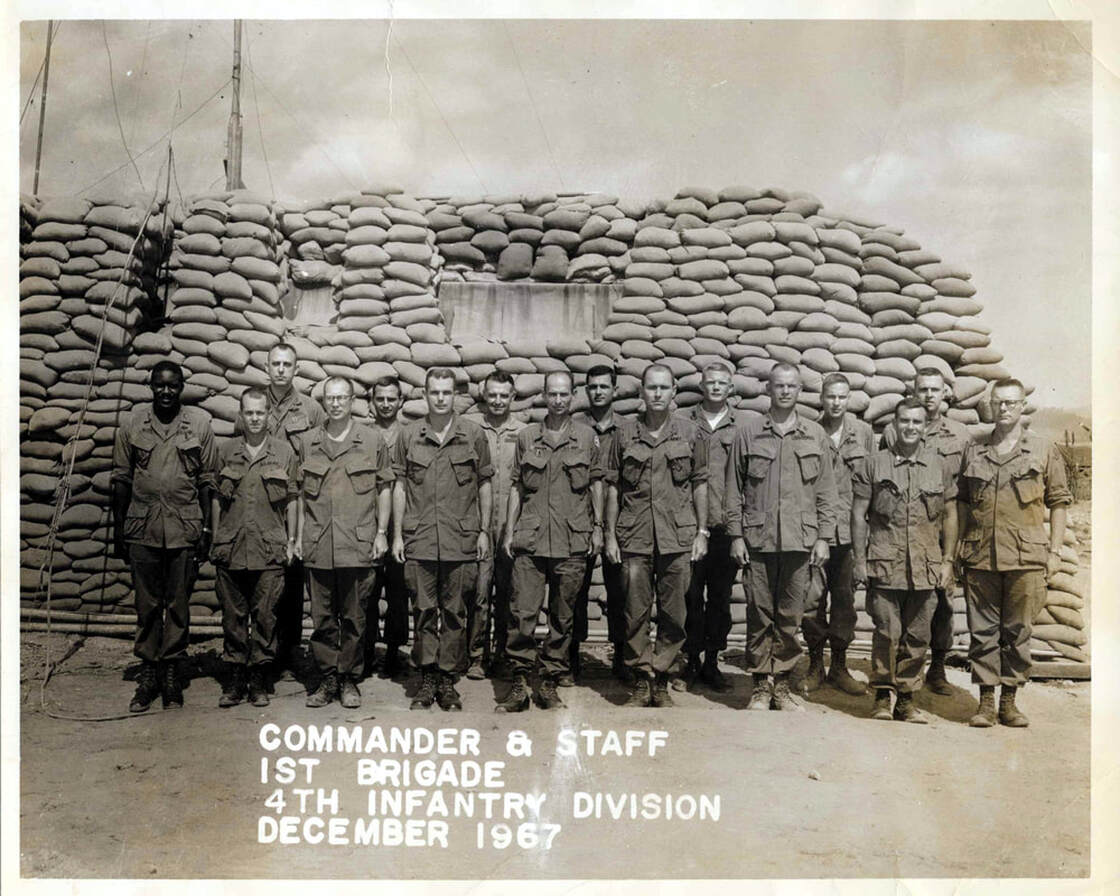 
This photo was provided by Robert Quinn, author of the book "The Battle of Dak-To".
The men in this photo are mentioned in Robert's detailed account of the action at Dak To.

Captain Norm Spaulding was part of the headquarters staff but was not in this photograph.  Here is some additional information that Norm provided.

Ernie,
No, I have not seen this photo before.  For some reason I wasn’t there when it was taken.  Neither was Bob Quinn.  He had moved on to the 1st Bn, 8th Inf as S3.  I knew most of the officers in the photo, more or less.  Some I served with and knew from our mutual assignment to the 1st Bn, 4th Infantry, 3rd Infantry Division in Aschaffenburg, Germany.  I’ve added commentary where possible.

I included Command Sergeant Major (CSM) James C. Gilbert who is not in the photo.  I  included  him as No. 17 out of respect for his position and the distinguished service that he rendered to the 4th Division, the US Army, and the nation. CSM Gilbert was KIA at Dak-To in 1970.  With utter disregard for his own life, while accompanying the 1st Brigade Commander in an attempt to extract wounded from a 1st Brigade unit in close combat with the NVA,he was hit by small arms and killed.

1:  Major William Mazek:
Ernie, you may remember, Maj. Mazyk.  He was the black Officer who took charge of the effort to recover the remains of the pilot of the OH23 that was hit by ground fire and crashed north of the Dak-To runway [Chief Warrant Officer Orrin Dyer].  The observer on board was wounded but survived [Larry Skoglund].

5: Major John DelBuono:
The Bde Commo Officer was responsible for all planning, implementation and operation of all the Bde networks.  He also played a key role in coordinating with classified commo operations and maximizing the capture and analysis of enemy communications.

6: LTC Edgerton:
LTC Edgerton was fairly new in-country when he was WIA from a mortar round that impacted outside the 1st Brigade TOC.  He was medevaced to the states.

7: Major Joseph Madden USAF:
Major Madden directed USAF tactical air strikes throughout the Dak To area.  He flew both the __?__ [O-1 birddog?] as well as the O-2 (Push/Pull) Cessna Skymaster.  Both aircraft were ideally suited to perform the FAC mission due to their ability to fly low and slow.  Major Madden was known to be brave, resolute, and rumor has it that on occasion, he flew low trolling for enemy ground fire.  While exceptionally dangerous, this technique enabled him to more accurately mark the target to facilitate the bombing and strafing accuracy of tactical fighter bombers.  Major Madden is also reputed to have on more than one occasion engaged the enemy with his M16 rifle, firing it through the open side window of his FAC aircraft.

9:  Major Charles Reswil - Chaplain:
I don’t know this officer, either name or position on Bde staff.  Newly assigned officers were routinely assigned to Brigade Staff for familiarization before being assigned elsewhere in the Brigade.  Familiarization training was generally waived for Officers with prior service in the “Nam”.

10: LTC John Madison:
Commanded the 1st Bn. 8th Inf, 4th Inf Div which was heavily involved in the fighting in the hills and valleys southwest of Dak To in November 1967, known as the Battle of the Slopes.

11:  Captain Leslie Jones:
Major Jones served on Brigade Staff as an Assistant Operations Officer (S3).  He primarily advised on the use of CS (Tear Gas) and smoke.  While defoliants were extensively used in the theater, they were applied by the USAF under the “Ranch Hand” program using C123 aircraft.  The Army had limited involvement in this program.  Major Jones was a multi-talented officer who was well able to accomplish any task assigned.

14: LTC Glen D. Belnap:
LTC Glen Belnap commanded the 3rd Bn, 8th Inf, 4th Inf Div.  In Dec, 1967, he and his CSM, Herbert Roberts, Jr. were in the Bn’s
C&C helicopter hovering above one of the Bn’s companies.  LTC Belnap directed the pilot to land.  While descending through  triple canopy, the helicopter is believed to have been hit by ground fire causing it to strike a tree and crash.  LTC Belnap, his CSM, and all others on board were killed.

15:  Captain Leonard Kreshefski - Asst. Brigade Operations Officer:
Captain Kreshefski was assigned to the 1st Brigade Staff on his first assignment to RVN.  He was assigned to 1st Brigade Staff for immersion and familiarization before moving on to a battalion staff position.  He was subsequently promoted to Major.
[note: Robert Quinn identified this man as being Captain Jeffery Fosbrook - Brigade Engineer]

17: Command Sergeant Major James C. Gilbert:
Command Sergeant Major Gilbert served several tours in Vietnam as First Brigade CSM totaling more than three years.  CSM Gilbert was KIA in 1970 while accompanying the Brigade Commander in the Commander’s Command and Control helicopter.  They were orbiting a 1st Bde unit that was in close contact with the NVA.  The unit had seriously wounded casualties and a medevac helicopter was unable to land to evacuate the wounded.  The Brigade Commander elected to try and land to evacuate them.  While landing, enemy small arms fire hit the helicopter, also striking CSM Gilbert and killing him.  CSM Gilbert was the consummate professional soldier.  During his numerous tours of duty in Vietnam, he  served many commanders and units with distinction.  He was truly one of the finest NCOs that I had the honor of serving with.

To read the description of CSM Gilbert's actions on 12 March 1969, Click Here

Here is a view of the 4th ID headquarters area.  South is at the top of the photo.

I am trying to identify the tents and bunkers in the area.  Some have been identified, like the TOC, where the group photo was taken.  Others I have put numbers on, so that you can tell me which tent was used for what, if you know. 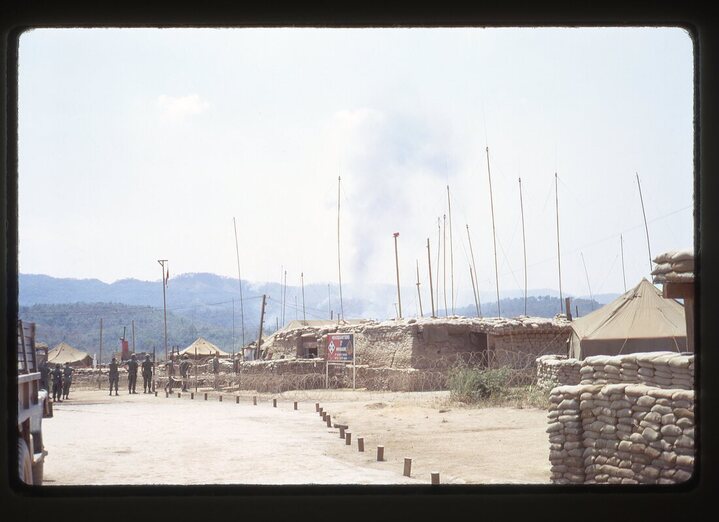 A view of the TOC area. Photo taken from a position near tent 12 in the above area photo.  Camera is looking South.
Photo by Norm Spaulding
I asked Robert Quinn if he had any stories to tell about these officers.  He offered me this anecdote:

Brigade Commander Cherokee had a reputation as a man who seldom smiled.  But on New Year's eve 1967 the Brigade commanders were called to Camp Enari, near Pleiku, for a drink and then they flew right back to Dak To.  It was around midnight when Cherokee's chopper came in and I was standing by the big map.  He walked up to me and yelled "Happy New Year", throwing a handful of confetti over my head, then he asked for a status update and went back to pan-face.  He was a great commander and kept a lot of folks alive.
He and Maury Edmonds S-3 went on to be General officers.

Robert Quinn also pointed me to this medal citation for Col. Johnson, "Cherokee", awarded for his work at Dak To 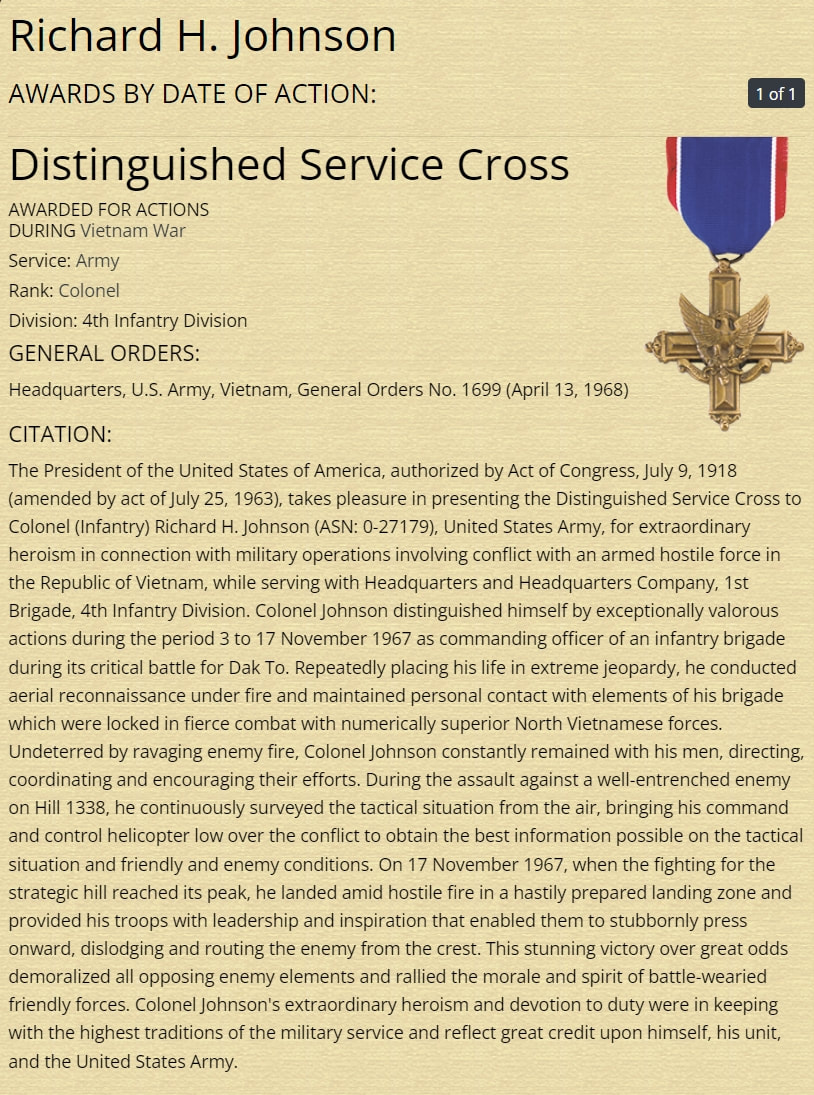