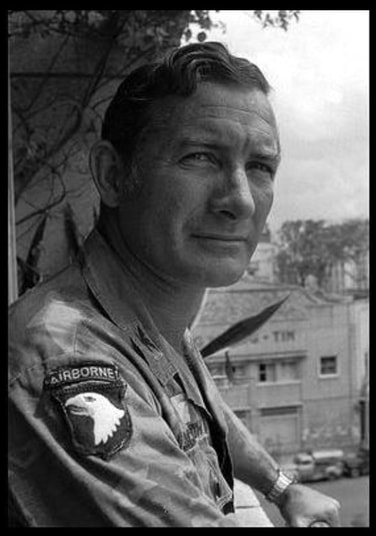 Below is the citation for MAJ David H. Hackworth's FOURTH Bronze Oak Leaf Cluster on his Silver Star Medal, for actions taken on this date in 1966:

Major Hackworth distinguished himself on 11 June 1966 while serving as a battalion commander during a combat operation near Dak To, Republic of Vietnam. When a friendly company was assaulted by a Viet Cong force, Major Hackworth immediately proceeded to their assistance in his command and control helicopter.  Unable to see the ground below, Major Hackworth ordered the pilot to land him in a hastily prepared landing zone.  As the aircraft hovered fifteen feet above the ground and received intense hostile fire, Major Hackworth jumped from the helicopter and moved to the company command post.  After a quick briefing, Major Hackworth sped to the defensive perimeter.  Ignoring the intense Viet Cong fire raking the ground around him, he moved from position to position, directing his men and giving them words of encouragement.  After observing the fanatical insurgents penetrate a section of the perimeter, Major Hackworth personally charged the breached position, killed three Viet Cong and wounded another.  He then successfully reorganized the defenses which held throughout repeated insurgent attacks. Through his courage and outstanding leadership, he contributed immeasurably to the defeat of the Viet Cong force.

Major Hackworth's extraordinary heroism in close combat against a numerically superior hostile force was in keeping with the highest traditions of the military service and reflects great credit upon himself, his unit, and the United States Army.

By Douglas Martin
May 6, 2005
Correction Appended

David H. Hackworth, a much-decorated and highly unconventional former career Army officer who became a combat legend in Vietnam, then enraged his superiors by lambasting the war on national television, died on Wednesday at a hospital in Tijuana, Mexico. He was 74.

The cause was bladder cancer, his wife, Eilhys England, said.

Colonel Hackworth lied to enlist in the Army at 15 and won a battlefield commission at 20 to become the Korean War's youngest captain.  He was America's youngest full colonel in Vietnam, and won a total of 91 medals, including two Distinguished Service Crosses, 10 Silver Stars, 8 Bronze Stars and 8 Purple Hearts.

Later, he was an author, a military affairs correspondent for Newsweek, a syndicated newspaper columnist and a campaigner for military reform.

In Vietnam, he became an almost mythical figure, arriving in 1965 with the first group of American paratroopers and going on to command the helicopter unit that was later immortalized in the movie "Apocalypse Now." Reputed to be the model for the film's infamous Colonel Kurtz, he drove his men so hard, he later wrote, that they put a $3,500 bounty on his head.  Early in the war he wrote a primer on how best to fight the Vietcong.

In a 1971 interview with Nick Proffit of Newsweek, Gen. Creighton Abrams, a top commander in Vietnam, called Colonel Hackworth "the best battalion commander I ever saw in the United States Army."

General Abrams spoke shortly after Colonel Hackworth appeared on the ABC television program "Issues and Answers" and harshly criticized the conduct of the Vietnam War, saying it could not be won.  He called the training inadequate and accused fellow officers of not understanding guerrilla warfare.

A report by the inspector general of the Army responded that Colonel Hackworth was derelict in his duties and had "acted without honor."  General Abrams and other top officers moved to court-martial him, but eventually allowed him to resign with an honorable discharge.

Colonel Hackworth went to Australia, where he eventually bought some gas stations and later owned and ran an upscale restaurant.  He also became a peace movement advocate.  He later moved to Greenwich, Conn.

David Haskell Hackworth was born in 1931 in Venice, Calif., and grew up in nearby Santa Monica.  His parents died when he was 5 months old, and he was raised by a grandmother who related tales of fighting ancestors.

At 14, he joined the merchant marine and served in the South Pacific.  At 15, he paid a wino to pose as his father and certify that he was old enough to join the Army.

He credited his later combat success to lessons learned from the hard-bitten, hard-drinking sergeants with whom he served in his first assignment, the post-World War II border dispute between Italy and Yugoslavia over the port of Trieste.

After the war he volunteered for Korea, where he commanded an all-volunteer regiment known as the Wolfhound Raiders.  In one battle he was shot in the head but refused to stop fighting.  He received three Purple Hearts in Korea.

Long before the United States was visibly involved in Vietnam, he served there with the Special Forces.  By April 1965 he was a confirmed career soldier and went back with the paratroopers, ready to fight a new kind of war.  He commanded a Black Hawk "Air Cavalry" brigade in which pilots wore Civil War campaign hats and flew in helicopters with crossed swords painted on them.

"We were a wild bunch," he said in an interview with The Los Angeles Times in 1989.

He became more and more independent, even rebellious, once threatening to take his troops to Canada if commanders persisted in talking about the use of nuclear weapons in Vietnam.  He ran a bordello and a massage parlor to keep his men happy and relatively protected from a virulent strain of syphilis.

After his television appearance on June 27, 1971, in which he said that as many as 20 percent of American combat deaths resulted from accidental American bullets, Colonel Hackworth's well-known indiscretions were used against him.

He admitted them in a book he wrote with Tom Matthews, "Hazardous Duty: America's Most Decorated Living Soldier Reports from the Front and Tells It the Way It Is" (Morrow, 1996).  But he said the regulations were wrong.

Ward Just, in his introduction to Colonel Hackworth's "About Face: The Odyssey of an American Warrior" (Simon & Schuster, 1989), said, "This was the simple truth, but in the pusillanimous atmosphere of 1971, Hackworth was seen as insubordinate and treacherous.  But not easily dismissed."

From 1990 to 1996, he was a contributing editor of Newsweek.  His column, "Defending America," was syndicated by King.

Colonel Hackworth's first two marriages, to Patricia Leonard and Peter Margaret Cox, ended in divorce.  He is survived, in addition to his wife, by two daughters and a son from his first marriage, Leslie, of Danbury, Conn.; Laura, of Los Angeles; and David, of Tampa, Fla.; a son, Ben, from his second marriage; a stepdaughter, Elizabeth England Scott; and four grandchildren.

Correction: May 10, 2005, Tuesday An obituary on Friday about Col. David H. Hackworth, a war hero and later a critic of the Vietnam War, misidentified two units he commanded and the helicopters used by American forces in Vietnam.  The Wolfhound Raiders were a platoon he led in Korea, not a regiment.  In Vietnam, he commanded a battalion of the 101st Airborne Division, not an air cavalry brigade; that battalion flew Huey helicopters, not Black Hawks.

In some copies the obituary also misidentified the character in the film "Apocalypse Now" said to have been based on Colonel Hackworth.  He was Lt. Col. Bill Kilgore, played by Robert Duvall -- not Col. Walter E. Kurtz, played by Marlon Brando.  In addition, the obituary misstated the year of Colonel Hackworth's birth and referred incompletely to the end of his military career.  He was born in 1930, not 1931.  Besides being granted an honorable discharge, he was allowed to retire with full benefits.