The ammo dump attack; I too was there on that day!  Thanks for you work on the site and especially the photo!

I was with the 374th RRC (Radio Research Company) Det .  We were actually the Army Security Agency.  We had a small restricted compound there to which I was able to locate!  What a blessing it was to find it.  I remember that day well.  Particularly when the ammo dump finally blew that night.  I was in my tent after going back and forth to the bunker most of the day.  I was laying down when they guy next to me said "I'm  not getting up any more".  Next thing I knew the whole outside lit up followed by the concussion wave that almost knocked us out of bed (you remember it I'm sure) needless to say my buddy who said he was not getting up again beat me to the bunker!

If I can figure out how to crop the photo to highlight the location of my compound  I will get it to you.  I also have some 35 mm slides of that day - I hope to get them in a digital format soon.

I also remember "puff the magic dragon" firing outside the perimeter; you might have helped them in their initial approach. 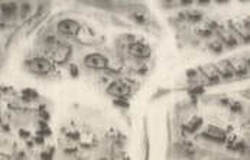 Ernie this was our compound two tents and two commo vehicles. Our bunker was under ground that you cannot see because the sandbags were close to the color of the surrounding dirt. (374th Radio Research Company, Det 1).  Across the road is an artillery battery.