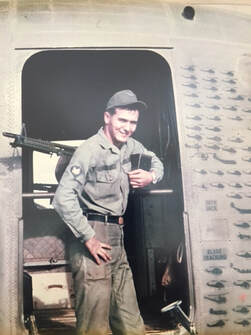 From Wayne Gallant 10/8/2021
​
Wayne wrote this letter home the day after the attack at Dak To. On that day he was aboard a CH-47A Chinook helicopter, part of the 540th Transportation Company, out of Qui Nhon.  His Chinook's tail number was 65-7988, call sign "Wicked".

Well yesterday was another one of those days!  We took off for Pleiku at 7:00 a.m.  When we got there we refueled, went to Kontum, made a recovery, and brought it back to Pleiku.

Then came the main event.  We had to make a recovery less than 2 miles from the Cambodian border, near Dak To.

So we refueled again and headed for Dak To.  On the way there, Dak To radio sent out a warning that the air strip was under mortar attack and the field was closed!  The NVAs mortared the place at 9a.m., in broad daylight!  They hit 2 C-130s on the runway and other areas.

Then we arrived on the scene.  We had to set down to get fuel at Dak To and because the field was closed, we had to enter the area at our own risk.  We came in and headed to the refueling area, about 300 yards from the burning C-130s.  I put the nozzle in the tank but no fuel came out.  The P.O.L. man shut the fuel off and was in a bunker and wouldn't come out.  About a minute later we found out why.

So I put the hose back, got in the ship and we started to hover (I was facing the C-130s).  Just as we started to lift off, one of the C-130s blew sky high.  I threw my hands to cover my face when the flash came.  Then the explosion threw me from my gun and flat on my back!  I was scared stiff.  When the plane blew, I saw its cargo thrown into the air, 105mm howitzer rounds!  That's why the P.O.L. man wouldn't come out of his bunker.

We then headed to the Cambodian border and got our sling load.  Luckily there was no ground fire.  On the way back, our gunships caught the V.C. that mortared Dak To and blew the holy hell out of them.

Yesterday took 10 years off my life and I'm not B.S.ing either.  Real Hairy.

So much with what's been happening with me, what's happening back home?  I got your letter today Pop, and Mom's.  We've been on the go so much lately that this was the first mail call I've made in about 4 mail calls.

I still haven't gotten Grandma Gallants SS package.  It's probably coming Boat Mail (12 months or more) if it's over 5 pounds.  That's what they're doing now.

I got Rose Mullins package today, thank her for me.​
​

Email conversation between Wayne and Ernie:

Thanks for giving me your letter home, describing the scene from your vantage point.  I will add your letter to the Stories page, unless you tell me otherwise.

Do you remember the full call sign of your Chinook?  On the audio page transcript of that day, there are several aircraft that I could not get their full call sign from the audio.  I would get the number but not the name, as in "cowboy 123".  So you were Wicked, but what number?  It may be that I talked to your ship on the audio tape.  That would be great if that's the case.

We came to Dak To to recover a downed 173rd Casper Platoon Sniffer Ship (it could detect NVA troop concentrations) that was 2 kilometers from the Cambodian border.  Coming in to Dak To, we had a bingo fuel warning light and needed fuel.  Tower told us to "enter on your own risk".  We had to because of low fuel.  We went to the POL blivits directly across from the two burning C-130s.  The POL guy refused to come out of his bunker to turn on the pumps.  I plugged back in and told the AC the situation and noted all the other aircraft were down at the other end of the field.  Got back in.  We hovered with me facing the two 130s when the rear aircraft blew with 105 shells exploding and being thrown on the air.  The blast blew me off my gun, flat on my back, and moved our Chinook about 20 feet left instantly.  We went down to the far end, shut down, inspected for damage - good to go, and got gas at the other POL point (East?).

We flew out, retrieved the Huey, no ground fire, and landed back at Dak To where we shortened the slings to normal length.  After that we took the Casper Huey back to the 540th in Qui Nhon for repair.

It was one of my more memorable missions.  You have my permission to post.  I was a SP/4 at the time.